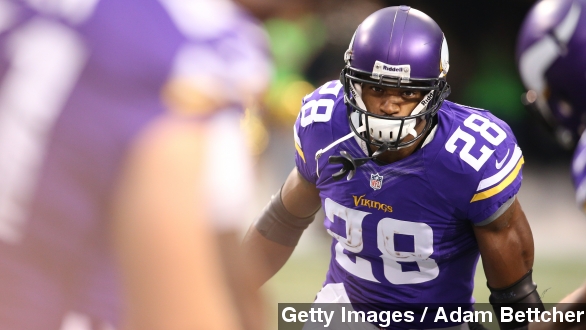 By Cliff Judy
February 26, 2015
A federal judge sided with Adrian Peterson on Thursday, ruling that the NFL improperly suspended the Vikings running back.
SHOW TRANSCRIPT

A federal judge has ruled Minnesota Vikings running back Adrian Peterson can be reinstated to the NFL, the latest development in months of legal fights in both criminal and civil courts that effectively benched one of football's best players for an entire season.

Peterson pleaded no contest to misdemeanor child abuse in criminal court, but his team had already placed him on the commissioner's exempt list that banned him from all team activities until his legal troubles were over. (Video via WCCO)

And NFL Commissioner Roger Goodell promptly suspended Peterson from the league until mid-April once he entered his no contest plea.

This has been a rough year for the league in terms of domestic violence and other accusations against star players. The judge cited one of those other player's cases in his decision for Peterson.

The NFL increased penalties for domestic violence accusations after a video surfaced of then-Baltimore Ravens running back Ray Rice knocking his wife unconscious in an Atlantic City elevator. (Video via TMZ)

In the ruling for Peterson, the judge noted the NFL decided it couldn't retroactively punish Ray Rice for doing something before the new rules were in place. U.S. District Court Judge David Doty wrote, "Yet, just two weeks later, the Commissioner retroactively applied the New Policy to Peterson."

The NFL Players Association had contended the arbitrator who upheld Goodell's lengthy suspension wasn't an impartial mediator because he spent nearly two decades as a league employee.

The executive director of the NFLPA released a statement following the ruling that read, in part, "This is a victory for the rule of law, due process and fairness."

The last line of the judge's ruling reads the case is now remanded to more proceedings, per the NFL's collective bargaining agreement. If Peterson gets reinstated, the Vikings will have to decide whether to trade Peterson, release him or keep him on the team. The NFL's league year begins on March 10, and the Vikings still have Peterson under contract for three more seasons.