Judge Rules Oscar Pistorius Is Not Guilty Of Murder 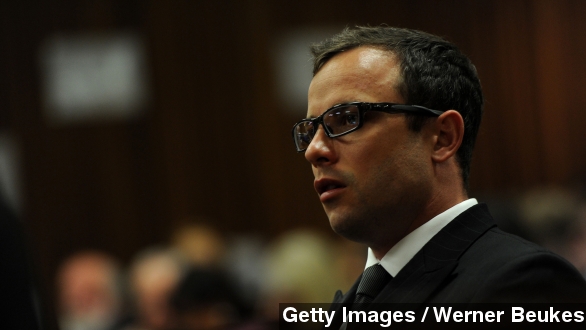 A partial verdict for Olympic track star Oscar Pistorius is in. He’s been cleared of murder charges related to the shooting death of then-girlfriend Reeva Steenkamp, though there are still more charges for the judge to rule on when court resumes Friday.

JUDGE THOKOZILE MASIPA ON CNN: "The state clearly has not proved beyond a reasonable doubt that the accused is guilty of premeditated murder. There are just not enough facts."

Soon after that, Judge Thokozile Masipa also ruled Pistorius not guilty of common law murder, meaning Pistorius will not be convicted of murdering Steenkamp. A guilty verdict for a charge equivalent to manslaughter is still possible and the judge said Pistorius was "negligent" in Steenkamp's death, though Pistorius visibly shook and sobbed as it became clear he wouldn't go to prison for murder.

Pistorius faced a flurry of charges including premeditated murder which carried a minimum sentence of life in prison or 25 years, culpable homicide, two counts of discharging firearms in public and illegal possession of ammunition.

As Judge Thokozile Masipa read a reportedly 100-page verdict, she was unflinchingly critical of witnesses, both sides of the case and Pistorius — who she called a poor and evasive witness. She relied instead on phone records and objective evidence to establish a timeline of Steenkamp's death.

Pistorius admits to shooting and killing his girlfriend, Steenkamp, on Feb. 14, 2013. The double amputee and former Olympian Pistorius shot her through a bathroom door in his house.

However, he and his lawyers say he didn’t know it was her and that he believed she was an intruder.

State prosecutor Gerrie Nel, on the other hand, argued Pistorius did know it was her, claiming there was a violent fight the night of the shooting.

He says that coupled with Pistorius’ supposed short temper might have led to murder rather than an accidental killing.

GERRIE NEL VIA ENCA: “He then armed himself?”

GN: “And he approached the danger”

Judge Masipa rejected that argument, however. In South Africa, the judge acts as both the judge and the jury, which is why a courtroom reading of the verdict lasted the entire morning and past the lunch break.

ABC writes, “It is a remarkable range of judicial authority” and adds Masipa “has a reputation for coming down hard on men convicted on charges of violence against women.”

Just before adjourning for the day, Judge Masipa said a reasonable person would've known the possible consequences of pulling the trigger, and Pistorius could have called the security for his housing complex or shouted for help from his balcony. The judge had said earlier Pistorius' belief the person behind the door was an intruder instead of Steenkamp was irrelevant. (Video via Euronews)

That leaves the possibility open for a guilty verdict on culpable homicide when court resumes Friday morning. The trial, which has received massive worldwide attention, is being broadcast live on several networks including BBC, Sky News, CNN and ENCA in South Africa.

The trial lasted 41 days with testimony from 37 witnesses. Steenkamp was just 29 years old when she died.