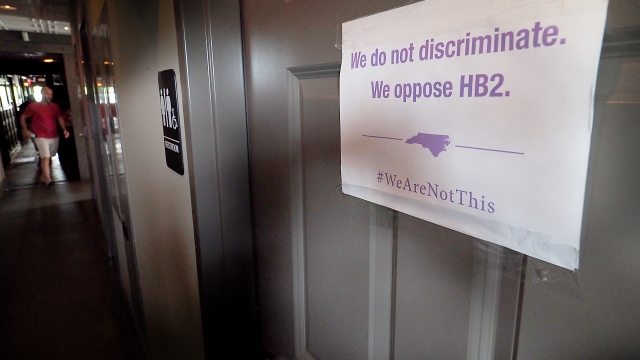 SMS
Judge Temporarily Strikes Down Bathroom Law ... For 3 People
By Eugene Daniels
By Eugene Daniels
August 26, 2016
The judge will make a final decision on North Carolina's HB2 after a trial in November.
SHOW TRANSCRIPT

On Friday, a judge ruled the University of North Carolina can't stop two transgender students and one employee from using bathrooms matching their gender identity — for now. The judge ordered a narrow injunction for just those three people until the court makes a final decision on the state's bathroom law.

The bill was passed in response to a Charlotte ordinance allowing transgender people to use the bathrooms and locker rooms associated with their gender identity. Under HB2, people have to use the bathroom for the gender listed on their birth certificate. HB2 also bans cities and towns from creating their own LGBTQ anti-discrimination laws.

The three trans people sued Gov. Pat McCrory for violating Title IX and the equal protection clause of the Constitution by signing HB2. In his ruling, the judge said, "No party has indicated that the pre-HB2 legal regime posed a significant privacy or safety threat to anyone in North Carolina, transgender or otherwise."

The judge also seems to poke holes in the law itself, saying laws against "indecent exposure, peeping and trespass" already get at the issues of privacy and safety HB2 claims to target.

The lead plaintiff said this about the small victory: "Today is a great day for me, and hopefully this is the start to chipping away at the injustice of HB2 that is harming thousands of other transgender people who call North Carolina home."

Since it was passed in March, HB2 has caused serious issues in the state. On top of criticism from the LGBTQ communities and its advocates, the state has had to deal with singers canceling concerts and the NBA pulling its All-Star Game from Charlotte, making the state lose out on millions of dollars.

But Gov. McCrory, who is up for re-election this year, isn't backing down from the bill. Friday, he told a crowd, "I don't think our principals and superintendent should be subjected to allowing a boy, who thinks he is a girl, but is still a boy to be able to enter a locker room, shower or bathroom facility."

The judge will issue a final ruling on HB2 after a trial in November.