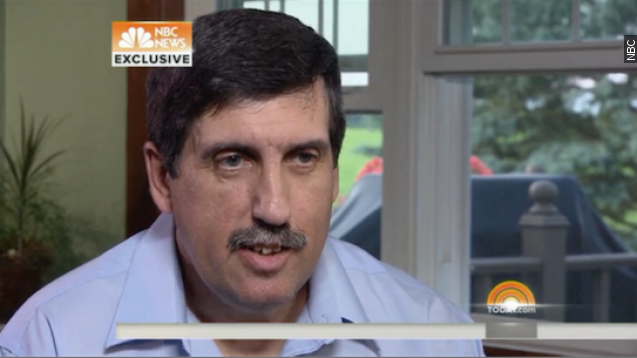 SMS
Joyce Mitchell's Husband Breaks Silence In NBC Interview
By Katherine Biek
By Katherine Biek
June 23, 2015
Lyle Mitchell spoke with NBC about how his wife, Joyce, broke the news to him that she helped two prisoners escape from a correctional facility.
SHOW TRANSCRIPT

The husband of the New York woman who's been charged with helping two convicted murderers escape from a correctional facility is finally speaking out.

David Sweat and Richard Matt escaped from Clinton Correctional Facility June 6th. Authorities say Joyce Mitchell, who worked at the facility, provided the two men with tools to escape from their cells.

Joyce's husband, Lyle Mitchell, sat down with NBC's Matt Lauer to talk about the moment his wife admitted she'd helped Sweat and Matt.

"She said, 'I got in over my head and I was scared. ... And then she told me he threatened her that someone inside the facilities was going to do something to me, to harm me or kill me, or someone outside the jail," Mitchell said.

Authorities have said that Joyce admitted to having a sexual relationship with Matt. But in his interview with NBC, Lyle said his wife told him things had never gone beyond Matt trying to kiss her.

Lyle's attorney previously spoke with ABC, reiterating the fact that his client knew nothing about Joyce's role in the prisoners' escape prior to it happening.

"He is not offering to testify for her, he's not denying anything that she's done. Everything that Joyce has told Lyle, he's gone to the police and he's let the police know about it," Peter Dumas told ABC.

Joyce pled not guilty to charges of promoting prison contraband and criminal facilitation. The two escaped prisoners have yet to be caught.

To hear more of Lyle's interview, head over to NBC's website.