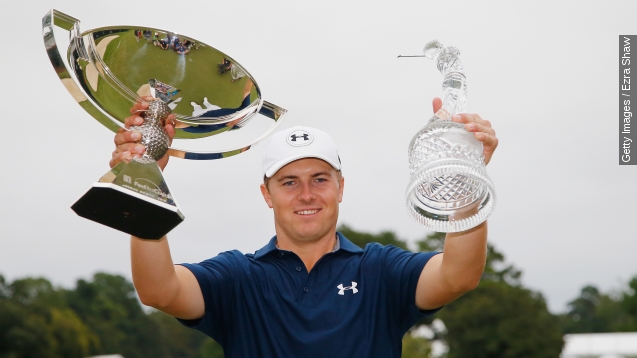 There's just no stopping Jordan Spieth. With a win on Sunday, the Dallas native just capped off the most prolific season in golf history.

He earned almost $1.5 million for winning the Tour Championship tournament, which brings his 2015 winnings total to over $12 million — an accomplishment we’ve never seen before.

He captured the first two major tournaments of the season as well, winning the U.S. Open and the Masters, a historic feat that wasn't lost on the then 21-year-old Spieth.

"Winning two majors in your life is hard enough ... It's something that's crazy to think about," Spieth said.

Sunday's win also netted Spieth the FedEx Cup championship, which tallies up performances over the whole year. The title got him a cool $10 million bonus for being the best golfer on tour this season and pushed him to the number one overall ranking in the sport.

With his phenomenal play at such a young age, Spieth can't help but draw comparisons to the most famous golfer on earth, Tiger Woods.

And when Spieth won the Masters in April at 21 years and eight months old, he became the second youngest to earn a green jacket, less than 6 months behind Woods.

But Tiger hasn't had a win since 2013. So the world of golf will likely turn to Spieth as the next to make a run at Sam Snead's record of 82 wins or Jack Nicklaus' 18 majors, but let's not get ahead of ourselves.

Jordan is 16 major championships behind Jack Nickalus and 76 wins away from Snead. Still, it's hard not to be excited about golf's newest superstar. (Video via CBS)