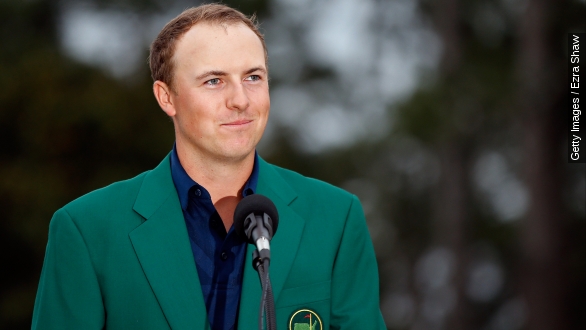 Well, let the comparisons to Tiger Woods begin! Twenty-one-year-old Jordan Spieth ascended to golf's elite with a record performance at the Masters over the weekend.

The golf prodigy captured his first career major championship with one of the most dominate performances crowds at Augusta National have seen in the tournament's 81-year history.

Spieth tied Woods' 1997 tournament record, finishing at 18 under par. And, call it coincidence, but both men also picked up their first green jacket at the same age: 21.

"This was arguably the greatest day of my life. ... And to join Masters history and put my name on that trophy and to have this jacket forever, is something that I can't fathom right now," Jordan Spieth said.

Spieth also became the first golfer ever to reach 19 under at one point. That would've broken Woods' record if not for one slip up on the final hole.

But there were plenty of other records Spieth took home at Augusta, and expect more to come at future tournaments.

The Texas native powered through the four-day stretch, breaking records for the best score after 36-holes and 54-holes in Masters Tournament history. He also broke the all-time record for birdies in a tournament, nabbing 26, and became the first wire-to-wire winner at Augusta since 1976 — meaning he lead the field at the end of each day.

The green jacket may be new to Spieth, but winning most certainly is not. Ready for another Woods comparison? (Video via Under Armour)

Spieth won the U.S. Junior Amateur in 2009 and 2011. The only other player to win that event twice? You guessed it: Tiger.

Well, not yet. He still needs some more victories under his belt to cement himself alongside golf's greats. But some have already speculated he, along with Rory McIlroy, will help usher in golf's new era.

"The arrival of a new star, and a new era, in American golf."

"It truly is a new era for golf. Broke countless records, well deserved."

A Forbes writer also argues Spieth's rise to fame sets him up to be golf's next $100 million dollar man — and with his showing at the Masters, that's almost a certainty now.

And USA Today's Chris Chase says competition between McIlroy, Spieth and a resurgent Woods could make for some exciting golf in the near future.

"It’s Rory vs. Jordan, long may their rivalry live. And if Tiger wants to get involved for a few years; no one’s going to mind."