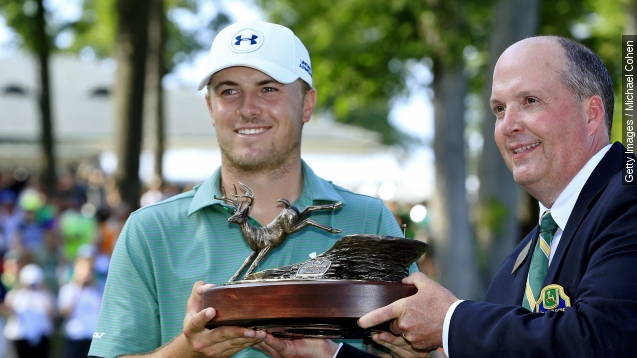 With a grind-out victory at the John Deere Classic on Sunday, it's finally time to give 21-year-old Jordan Spieth the respect he deserves.

After shooting a career-low 61 on Saturday, Spieth stayed hot and beat out Tom Gillis in the second round of a playoff Sunday to capture his fourth title of the season — all before the British Open.

Now, the John Deere Classic isn't a major victory, but the tune-up proved Spieth is a real player not just riding on beginner's luck. In fact, going into the British Open, he could claim golf's No. 1 spot.

He already has victories at the U.S. Open and the the Masters. Adding the British Open would make him just the second player in the modern era to win his first three majors in one year — the other being Ben Hogan in 1953. (Video via KTBC)

And with top-ranked golfer Rory McIlroy out indefinitely with a sprained ankle and Tiger Woods a distant memory at this point in his career, Jordan Spieth is set to be golf's next big thing.

The New York Times writes: "Everybody in the game now knows Spieth's name. And in his quest to become the first player in the modern era to win all four majors in the same year, Spieth has built a following in golf that transcends its core audience, much as Tiger Woods did at the same age."

But as Spieth tells ESPN, he's been careful not to let the success and attention eat him alive.

"Once I tee off, it'll be more about just calming the emotions of this is another major championship and less about the outside noise. ... When I'm inside the ropes, I seem to not really care much about that and just compete," Spieth told ESPN's Scott Van Pelt.

Through 52 events, Spieth sits at second overall in the official world golf rankings. The British Open begins Thursday. Defending champion Rory McIlroy will not be competing.