Jon Stewart Drops The Jokes To Talk About Charleston 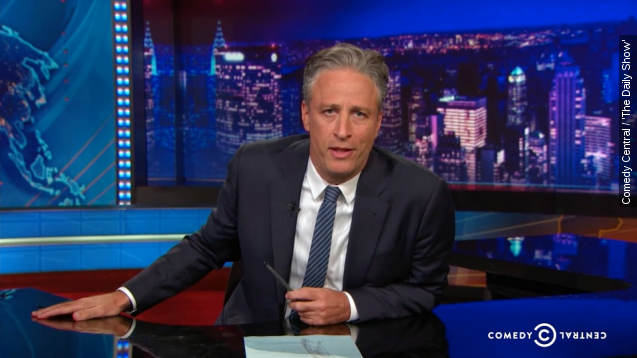 The night after a gunman killed nine people in Charleston's Emanuel African Methodist Episcopal Church, "The Daily Show"'s Jon Stewart took time away from his usual biting satire to be serious with his viewers.

“I didn’t do my job today, so I apologize. So I got nothing for you in terms of jokes and sounds. I honestly have nothing other than just sadness once again," Stewart said.

During his Charleston monologue, Stewart also took a moment to criticize South Carolina for essentially glorifying the Confederacy and suggested that it alienated the state's black population.

It was a rare moment of sobriety for the host, but it's not the first time he's departed from the show's comedic overtures.

When a Staten Island grand jury decided not to indict the NYPD officer who placed Eric Garner in a chokehold, Stewart offered another serious moment.

"But damn. We are definitely not living in a postracial society. And I can imagine there a lot of people out there wondering how much of a society we are living in at all."

And once again after the Charlie Hebdo shooting in Paris.

"Our hearts are with the staff of Charlie Hebdo and their families tonight. I know very few people go into comedy, you know, as an act of courage. Mainly because it shouldn't have to be that."

Hopefully Stewart won't have reason to deliver any more serious monologues before he departs "The Daily Show" this August.

This video includes images from Getty Images and Jason Eppink / CC BY 2.0.