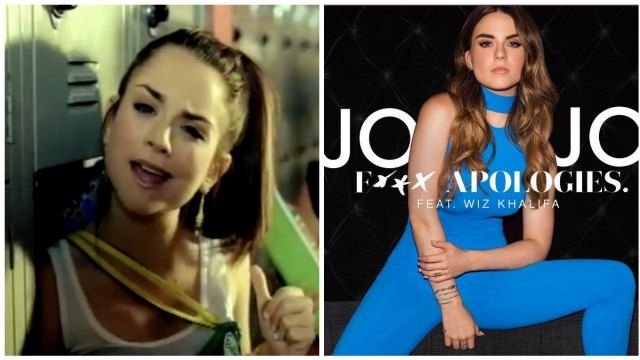 SMS
JoJo Will Release Her First Album Since You Were In Middle School
By Cody LaGrow
By Cody LaGrow
July 29, 2016
The singer released a new single titled "F*** Apologies," featuring Wiz Khalifa, to tease her album "Mad Love," which drops Oct. 14.
SHOW TRANSCRIPT

JoJo — that mid-2000s pop star who just really made you feel like she understood your middle school relationship drama — is back with plans for her first album in nearly 10 years.

And instead of using her lyrics to tell whoever you were dating at 13 to "Leave, Get Out," maybe try her more adult lyrical advice.

JoJo sort of began her comeback last year when she reminded us she slays when she released a "tringle," or three singles all at once. And even when you cut the smoke and mirrors, JoJo proved she still has the range.

Over the past decade, JoJo sprinkled us with a few other singles after getting out of a harsh legal battle with her old record label that even prevented her from releasing music. This week, she opened up with Pop Sugar about how tumultuous that relationship was.

"They wanted me to lose weight fast. ... I was injecting myself. This is like a common thing that girls do, by the way. Like, 'the girls,' or whatever. It makes your body only need certain calories, so I ate 500 calories a day. This was the most unhealthy thing I'd ever done," JoJo explained.

It seems the woman who was once the youngest artist ever to have a No. 1 single in the United States is ready to return to the reclaim the charts. I mean, did she think we wouldn't be excited?