Joining The Military Could Get Easier (And More Attractive) 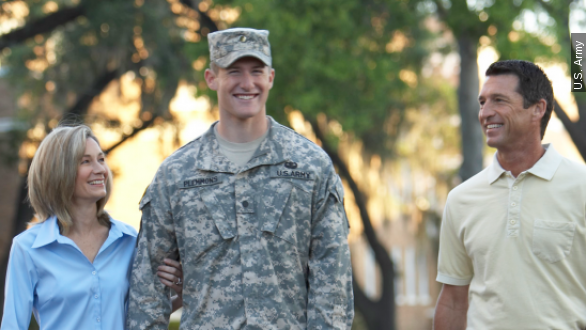 The U.S. Department of Defense wants to make joining the military easier (and more attractive).

He's only been in office about a month, but Defense Secretary Ash Carter is moving fast to try to fix the military's recruitment and retention problem. Here's how he wants to do it.

For recruits with certain skills — especially those in the cyberspace and tech realm — the Pentagon might relax restrictions around age and criminal record.

Age restrictions for recruits currently vary by service branch — with 35 the upper limit for Army enlisted, 34 for the Navy and 28 for the Marines.

Once in, recruits can expect more robust benefits, including a 401(k)-style retirement account.

Since troops have to serve at least 20 years to get a pension in today's military — and since many serve less than that — the Center for Strategic and Budgetary Assessments estimates more than 80 percent of service members leave the military with no retirement.

For troops looking to start a family or go back to school, the Pentagon might even allow mid-career breaks — sabbaticals that allow service members to take a break, then come back to where they left their careers.

Whether all that will be enough is definitely a question. With the Army specifically — fewer officers are sticking around for careers. That's a drop that began with the Iraq War.

The branch has been accused of mismanaging talent and restricting autonomy — criticism we so far haven't seen addressed in Carter's plans.

And with unemployment in the private sector going down — the military might struggle with recruitment and retention despite Carter's proposals. The secretary kicks off a two-day trip to Pennsylvania and New York Monday.