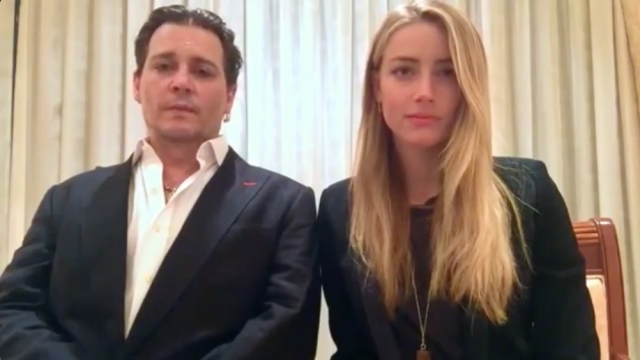 "When you disrespect Australian law, they will tell you firmly," Johnny Depp said.

"I am truly sorry that Pistol and Boo were not declared. Protecting Australia is important," Amber Heard said.

Johnny Depp and his wife Amber Heard are stiltedly apologizing for bringing their two dogs into Australia illegally last year.

"We were under the impression that we had all the paperwork for the dogs. We were there with the dogs in front of everybody. Um, there might have been other things smuggled," Depp told Jimmy Kimmel.

Australian authorities charged Heard — not Depp — after she brought her two Yorkshire terriers with her on a private jet to go visit Depp, who was in the country filming the next "Pirates of the Caribbean" movie.

Australia's maximum penalty for the illegal import of animals is 10 years in prison and a $75,000 fine, but Heard got off very lightly Monday after she appeared in court.

She received a one-month good behavior bond of about $765 after pleading guilty to providing a false immigration document. This means the actress can't commit any other offense in the country through May 18.

Heard was also required to read a prepared statement, which was filmed and placed on the Australian Government Department of Agriculture and Water Resources' YouTube account.

"Australia is a wonderful island, with a treasure trove of unique plants, animals and people," Heard said.

"It has to be protected," Depp said.

It's quite clear that Heard and Depp would rather be doing anything other than filming that video, and Twitter users seem to agree.

One said, "Deep is very underrated as an actor. That performance of 'man loathing every second of being forced to do this' was utterly convincing." While another said, "I doubt Depp or Heard could have been any worse at the acting in that video if they tried."

And then there's all those people who think the apology looks suspiciously like a hostage video.

This video includes clips from NBC and TBS and images from Getty Images.