John Kasich Gets Sign Of Hope In New Hampshire Poll 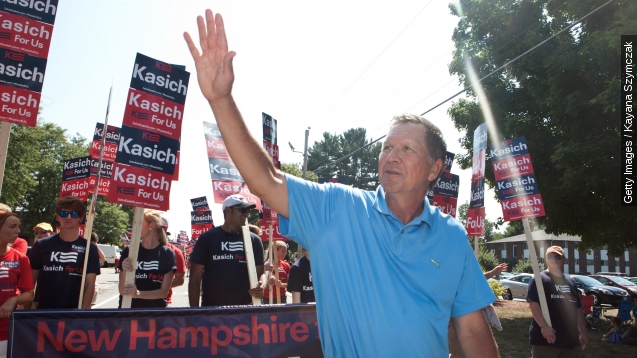 SMS
John Kasich Gets Sign Of Hope In New Hampshire Poll
By Kate Grumke
By Kate Grumke
December 25, 2015
This early in the race, polls don't necessarily tell us much, but it's a note of optimism for the candidate currently averaging in ninth place.
SHOW TRANSCRIPT

Ohio Gov. John Kasich just got a sign of hope for his campaign for the GOP's presidential nomination.

In a poll out of New Hampshire, likely Republican primary voters rated him third as someone they would vote for.

He was behind Donald Trump and Marco Rubio, with a margin of error of 4 percent.

Kasich is seen as one of the candidates vying for the establishment Republican vote and is considered more moderate. In the fourth Republican debate, he criticized Donald Trump's call to deport millions of undocumented immigrants.

"But if people think that we are going to ship 11 million people who are law-abiding, who are in this country, and somehow pick them up at their house and ship them out of Mexico — to Mexico, think about the families. Think about the children," Kasich said.

But, in RealClearPolitcs' average of multiple polls, Kasich is ninth in the GOP field.

And Kasich is also lagging when it comes to fundraising. At the last filing, he had $2.6 million in cash — behind five of his rivals.

Still, a strong showing in an early primary could give his candidacy some fuel. The New Hampshire primary is Feb. 9.