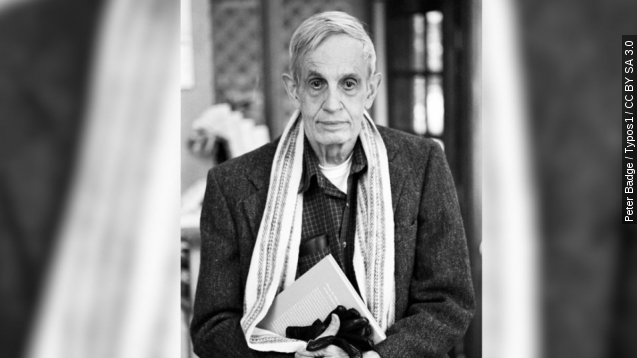 SMS
John Forbes Nash Jr., Subject Of 'A Beautiful Mind,' Dies
By Matt Moreno
By Matt Moreno
May 24, 2015
John Nash was reportedly riding in a taxi in New Jersey with his wife, Alicia, when it crashed into a center median.
SHOW TRANSCRIPT

Citing police officials, NJ.com reports Nash and his wife were thrown from the taxi cab they were riding in after it plowed into a center median. Police believe they were not wearing their seat belts.

Nash, 86 years old at his time of death, was the subject of the 2001 film "A Beautiful Mind" starring Russell Crowe. The film focused on Nash's mathematical prowess and his battle with schizophrenia. (Video via Universal Pictures / "A Beautiful Mind")

Nash is best known for his work in mathematics, especially game theory — the study of decision-making. In 1994, Nash won the Nobel Prize in economics for his research in the field. (Video via Al Jazeera)

No summons or arrests have yet been made in relation to the car accident.

This video includes images from Getty Images and Elke Wetzig / CC BY SA 3.0.