Clinton Administration May Want Biden, But He Wants Out Of Politics 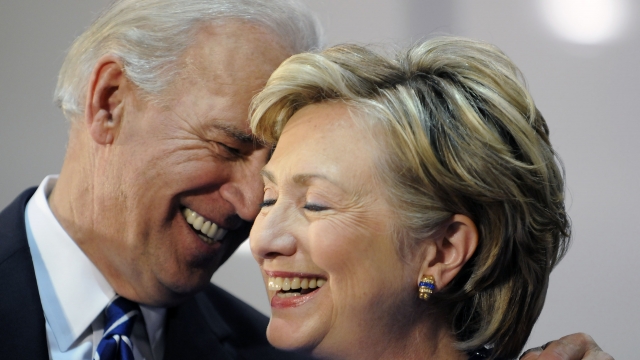 SMS
Clinton Administration May Want Biden, But He Wants Out Of Politics
By Ethan Weston
By Ethan Weston
October 29, 2016
It was rumored the vice president was a top pick for Hillary Clinton's secretary of state, but, true or not, he said he wouldn't want the gig.
SHOW TRANSCRIPT

Hillary Clinton may or may not be considering Vice President Joe Biden as a top pick for her secretary of state. Either way, Biden isn't into the idea.

The "Secretary Biden" speculation started Thursday when an anonymous source told Politico that Biden was at the top of a short list of people Clinton might choose to be her secretary of state if she wins the election.

But Biden told CNN-affiliate KBJR: "I have no intention of staying involved. I have a lot of things to do, but I'll help her if I can in any way I can."

His statement isn't too surprising. Biden has been hitting the campaign trail for Clinton for weeks, but he's also made it clear he's interested in moving on from politics.

And more anonymous sources, this time ones close to Biden, told CNN they weren't aware of the vice president being on a list or that he was being considered for a position in Clinton's potential administration.

The Clinton campaign hasn't said if Biden's name is on a list for secretary of state. It seems like they're trying to avoid talking about much beyond the current election.

Biden isn't the only person rumored to be on Clinton's shortlist. It's speculated that campaign chairman John Podesta is a top choice for White House chief of staff.

But, like Biden, Podesta might also be feeling the itch to get out of politics. He's told friends in private he isn't interested in returning to the job he held under former President Bill Clinton.

Both campaigns have transition teams looking at candidates for positions in the future administration. The teams help smooth out the transition from campaign to presidency.