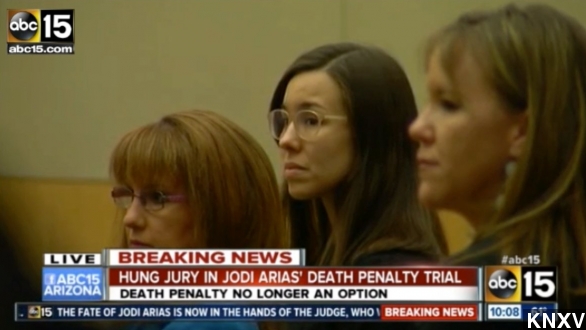 SMS
Jodi Arias Hung Jury: No Death Penalty
By Matt Moreno
By Matt Moreno
March 5, 2015
Jodi Arias was convicted of murder in 2013, but a jury was unable to agree on whether to sentence her to death. A previous jury was also divided.
SHOW TRANSCRIPT

Convicted murdered Jodi Arias will not receive the death sentence after an Arizona jury failed to reach a decision Thursday.

"In my assessment, we are hung and additional time will not change this," Maricopa County Judge Sherry Stephens said.

This announcement came after jurors deliberated for 26 hours over five days.

Arias was first convicted of the first-degree murder of former boyfriend Travis Alexander in 2013, but her sentencing was up in the air after a hung jury in May 2013. Judge Sherry Stephens declared a mistrial for the penalty phase at that time, and Thursday's sentencing is the result.

Alexander was found brutally murdered in 2008 after he didn't show up for work. He was stabbed 27 times, shot once and his throat was slit. (Video via HLN)

The jury was tasked with deciding between the death penalty and life in prison.

Judge Stephens says Arias will receive sentencing April 13. Our partners at KNXV in Phoenix report she will choose between life in prison without parole or the possibility of parole after 25 years.