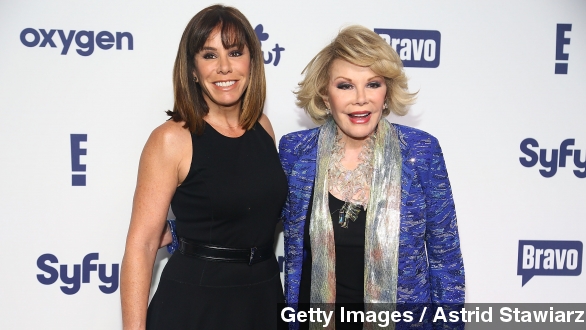 Melissa Rivers, daughter of the late Joan Rivers, is suing the clinic where her mother developed fatal complications during a routine surgery.

The lawsuit, filed Monday, accuses Yorkville Endoscopy of negligence for a procedure it performed on Rivers Aug. 28. Rivers stopped breathing and was taken to Mount Sinai Hospital in a coma, where she passed away on Sept. 4.

The New York Daily News reports the allegations in the suit include performing a biopsy without Rivers' consent, ignoring signs that Rivers' vitals were failing and taking selfies with Rivers while she was under.

Melissa has reportedly been planning to sue the clinic since October. After filing the suit Monday, she said in a statement, "The level of medical mismanagement, incompetency, disrespect and outrageous behavior is shocking and frankly, almost incomprehensible."

The clinic has been under increasing scrutiny since Rivers' death. It's already lost several accreditations and could lose access to Medicare and Medicaid funds if it doesn't pass an inspection on Mar. 2.