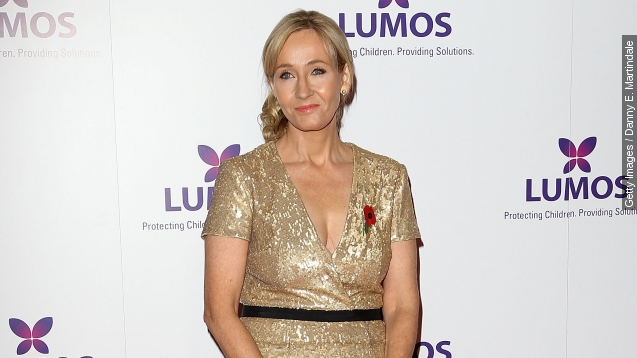 Author JK Rowling is not one to keep her opinions to herself — often laying them out on social media for all her fans to see.

And on Tuesday, she tweeted a picture of the front page of the Daily Express. The main story is one criticizing an upcoming BBC program that was filmed at a migrant camp in Calais, France.

She's referring to Richard Desmond, who, along with owning the Daily Express, also owns the Red Hot Adult channels and Television X – both of which are adult entertainment sites.

Much like Hermione Granger advocating for house elves everywhere, there are plenty of other times the Harry Potter author has taken on social justice using Twitter. (Video via Harvard Magazine)

Earlier this year just days after the Charlie Hebdo shooting, Rupert Murdoch tweeted his belief that Muslims needed to be held responsible for the jihad attacks.

This caused Rowling to tweet: "I was born Christian. If that makes Rupert Murdoch my responsibility, I'll auto-excommunicate."

Back in 2014, when Rowling announced the character Professor Albus Dumbledore was gay in her series, a man responded that he was no longer a fan. (Video via Warner Bros. / 'Harry Potter and the Half-Blood Prince')

She promptly responded back, "I advise you to start following Brian Souter at once. He's much more your kind of person." While telling her other fans, "If you're waiting for universal popularity, you'll be on Twitter a VERY long time."

Well said. The BBC program filmed at a Calais migrant camp the Daily Express was denouncing in its article will air Aug. 16.