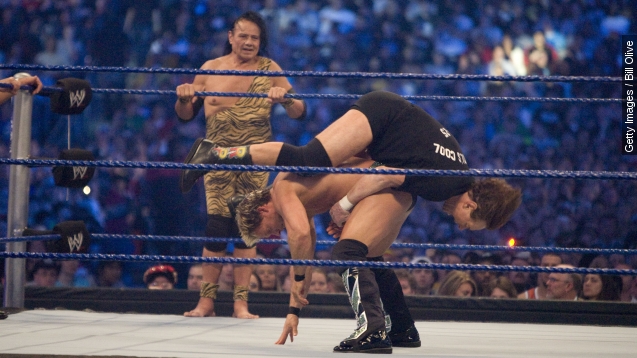 Former professional wrestling champion Jimmy "Superfly" Snuka has been charged with the murder of his girlfriend more than three decades after her death.

"The charges of third degree murder and involuntary manslaughter have been filed today against former professional wrestler James Snuka in connection with the 1983 death of his 23-year-old girlfriend," Lehigh County District Attorney Jim Martin told The Morning Call of Allentown.

Nancy Argentino was found dead after authorities were called to a hotel room near Allentown, Pennsylvania, on May 10, 1983.

Snuka told police he was at a wrestling event at the Allentown Fairgrounds at the time and had later returned to his hotel room to find her unresponsive in bed. (Video via World Wrestling Entertainment)

Seventy-three-year-old Snuka was the only person of interest at the time. But he was never charged, and the investigation eventually went cold. (Video via MMA & Sports Xtreme Show)

That is, until 2013, when The Morning Call of Allentown ran a story that raised questions about the case.

The paper revealed a never-before-seen autopsy report that determined Argentino died of traumatic brain injuries consistent with being hit by a stationary object and labeled her death a homicide.

Lehigh County District Attorney Jim Martin said Argentino's sisters approached him after the story came out, and he decided to reopen the case.

Authorities claim Snuka changed his story multiple times about how Argentino sustained those fatal brain injuries. They also claim he beat her in a hotel room in New York four months before her death.

Snuka has maintained his innocence in the case for years.

He wrote in his 2002 autobiography, "Many terrible things have been written about me hurting Nancy and being responsible for her death, but they are not true. ... I never hit Nancy or threatened her."

But Argentino's sister told the New York Daily News she always believed Snuka was responsible for her death. "This is really a miracle. I don’t really have anything to say to him. He’s got a guilty conscience. Let him deal with his demons."