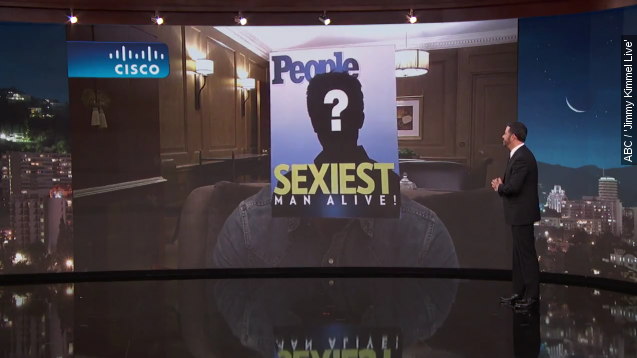 People Magazine's Sexiest Man Alive issue is almost here, and we all know what that means.

It's time for Jimmy Kimmel to name the lucky guy for the first time on "Jimmy Kimmel Live."

And the handsome, gorgeous, insanely attractive winner is ...

"Are you David Beckham?" asked Jimmy on "Jimmy Kimmel Live."

"Yes, I am!" David Beckham said as he took off his question mark mask.

Yes, 40-year-old soccer star David Beckham is the Sexiest Man Alive for 2015. Talk about a goal!

And the father of four says he couldn't have been more surprised by the honor, which was held by "Thor" heartthrob Chris Hemsworth last year. (Video via Paramount Pictures / "Thor")

Ah, gotta love a guy who doesn't shy away from the humble brag.

You can check out more of what David had to say about his Sexiest Man Alive title when the issue hits newsstands later this week.