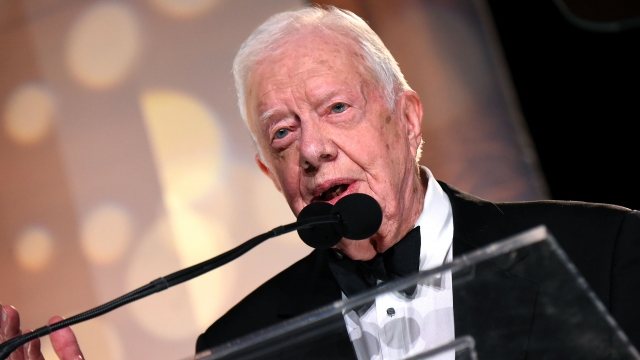 SMS
Jimmy Carter Speaks Up About Racism And Why We Shouldn't Keep Quiet
By Eugene Daniels
By Eugene Daniels
September 15, 2016
The former president is calling on Baptist leaders to help stop racism.
SHOW TRANSCRIPT

For the most part, former President Jimmy Carter seems to shy away from the national spotlight. But now he's speaking out on a "resurgence of racism" he finds troubling.

Carter spoke at a summit of Baptist leaders trying to create partnerships between black and white Baptist churches. The former president said staying quiet about discrimination is an acceptance of it and called on Baptists to help change things.

And Carter tried to keep politics out of the conversation, but he did tell the group: "I think there will be a positive reaction after this election. And I think the average person in America now will be looking at how to do better things, how to have a superb American policy on peace and human rights and other aspects of life. I think we’ll raise our standards as a public and I believe our next president will accommodate that inclination."

And Carter wouldn't be alone in his thinking. Last month, a Gallup poll found both white and black people feel racism is widespread.

Sixty-one percent of Americans say racism against blacks is widespread, but the perception changes a little when broken down by race. Eighty-two percent of blacks think racism is an issue, while only 56 percent of white people agree. Both of those numbers are up from last year, increasing 10 percent and 7 percent, respectively.

That perception is reflected in other polls and studies as well. The Southern Poverty Law Center cites one expert who says a rise in racism as our country becomes more diverse is to be expected. As ethnic diversity rises, trust between and within groups declines.

Carter wasn't all doom and gloom about race relations, though; he reminded the group, "We just have to remember that our country is resilient" adding, "We've always had the ability to correct our mistakes."