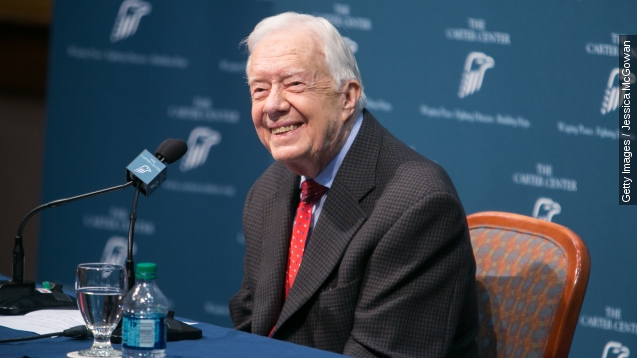 SMS
Jimmy Carter Says He's Cancer-Free
By Melissa Prax
By Melissa Prax
December 6, 2015
The former president announced cancer had spread to his brain in August, but a successful treatment has apparently reversed his condition.
SHOW TRANSCRIPT

Former president Jimmy Carter says he no longer has cancer.

According to the Atlanta-Journal Constitution, Carter made the announcement at his church Sunday morning, saying a scan this week showed the cancer was gone.

The 91-year-old had announced in August that his cancer had spread from his liver to spots on his brain. During a press conference, he said, "It is in the hands of God."

His initial diagnosis gave him a few weeks to live, but he began a radiation treatment combined with Keytruda, a relatively new immune-boosting drug, which doctors say he was "responding well" to. (Video via CBS)