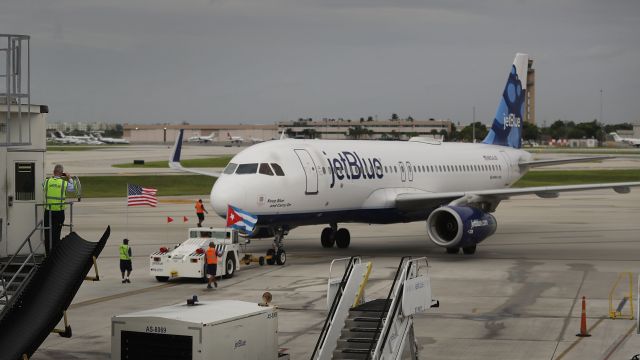 For the first time in more than 50 years, a commercial flight from the U.S. has landed in Cuba.

JetBlue Flight 387 took off with much fanfare from Fort Lauderdale, Florida, on Wednesday with about 150 passengers on board; 51 minutes later, the plane touched down safely in Santa Clara, Cuba.

Among the plane's 150 passengers was U.S. Department of Transportation Secretary Anthony Foxx, who announced eight airlines have been authorized to schedule flights to Havana as early as this fall.

This doesn't mean Cuba is open for tourism, though — the U.S. still has travel restrictions on Cuba, which the White House can't lift without Congress' help. Right now, travel to Cuba still has to fall under one of 12 approved reasons to be legal.

But the U.S. government hopes to approve more airliners and travel routes between the two countries in the future — provided Cuba can upgrade its airport infrastructure to meet the demand.