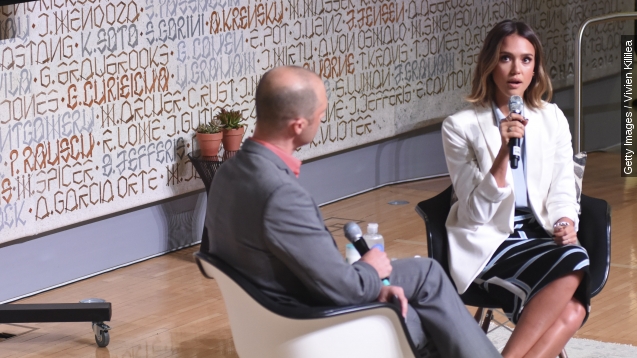 SMS
Jessica Alba Faces Critics Of Company's Sunscreen
By Ryan Biek
By Ryan Biek
August 4, 2015
Jessica Alba quickly responds to criticism of her company's sunscreen, but will it be enough to make the negative publicity go away?
SHOW TRANSCRIPT

Jessica Alba quickly turned heads by building a billion-dollar business outside of acting.

The Honest Company sells everything under an organic image –– from shampoo to diapers to sunscreen.

That last one doesn't seem to be working so well right now, though. Folks have taken to social media to complain about the ineffectiveness of Honest's sunscreen.

In response, Alba and a business partner said the company's sunscreen has passed all SPF 30 testing requirements, but also apologized for any bad experiences, saying, "We've personally picked up the phone to speak with many of you who have called our customer service hotline."

Despite the calm response, Alba's company has caught some flak over its products before.

Take their diapers, for instance — Slate wrote a piece in 2013 claiming Honest diapers aren't quite as superior as it claims when stacked with the conglomerates it advocates against.

Others have argued these conglomerates' products aren't as dangerous as Honest claims them to be, crediting Honest's success mostly to paranoia instilled in parents.

If the feeling is that Honest's products don't live up to its name, despite being significantly more expensive than the competition, the $250 million revenue predicted for this year could be in big trouble.