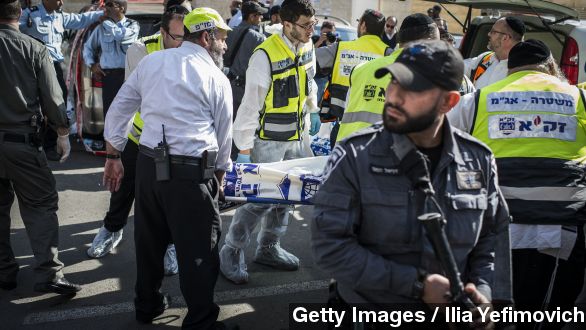 When a terrorist attack at a Jerusalem synagogue made front-page news around the world Tuesday, the international media took some heat for what some saw as slanted coverage.

We'll start with this graphic that appeared in a CNN report. It used the word "mosque" to describe the "synagogue" where the attack took place. An innocent mistake, maybe, but critics call it another example of a pro-Palestinian bias.

Then there was this graphic from the network, reading: "4 Israelis, 2 Palestinians" dead — arguably a bit misleading when you consider the two Palestinians were not victims, but knife-wielding murderers, according to police. (Video via CNN)

As one pro-Israeli media watchdog group writes, the problem is: "The casual reader who only skims headlines is missing the two critical elements a headline is supposed to convey: who (Palestinians) and what (killed)."

BBC ANCHOR: "Sorry, we don't actually want to see that picture. If you can take that down ... "

That exchange Tuesday prompted accusations the BBC shows more sympathy for Palestinians than it does Israelis.

The accusation is a familiar one. Critics say the media unfairly portrayed Israel, not Hamas, as the aggressor in this summer's war in Gaza. (Video via ODN)

But the criticism goes both ways. Western news outlets are routinely accused of ignoring the plight of Palestinians living in Israeli-occupied territories.

Earlier this week, the reported suicide of a Palestinian bus driver got little international media attention, despite Arab media outlets saying he was actually murdered by Jewish extremists.

After Tuesday's attack, Israeli Prime Minister Benjamin Netanyahu vowed to respond harshly. He blamed Hamas as well as Palestinian Authority President Mahmoud Abbas for inciting the violence. In a statement of his own, Abbas condemned the attack.