Jeremy Clarkson Back On BBC, But Not In The Driver's Seat 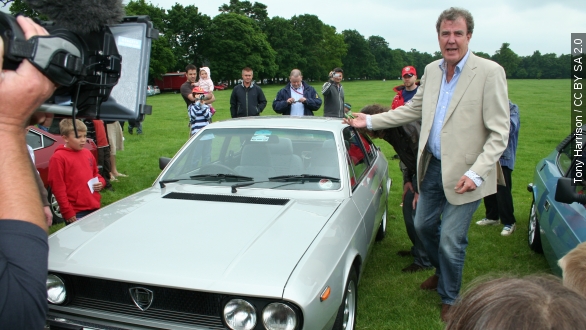 Two weeks after the BBC announced it would let Jeremy Clarkson's contract expire, it's bringing the controversial presenter back.

That was despite a petition calling for his reinstatement, which gathered more than one million signatures and was delivered to the BBC in a tank. (Video via ODN)

Now, the broadcaster has announced Clarkson will be back on its airwaves as guest host of its satirical quiz show "Have I Got News For You."

Clarkson has hosted the show 11 times in the past 13 years, including one time in 2008 — the BBC was quick to point out in its announcement— when he threw a pen at one of the panelists. (Video via BBC)

While the incident was relatively light-hearted, the BBC noted the pen drew blood and went on to describe the injuries suffered by the producer Clarkson allegedly attacked seven years later.

Clarkson put the BBC in a bit of a sticky situation, given "Top Gear"'s enormous popularity worldwide, and the feeling that if Clarkson goes, so does the show — including fellow presenters Richard Hammond and James May. (Video via East Coast Radio)

"Will you stay?" an interviewer asked May on Channel 5.

"Well I don't want to talk about that too much, but I think we're very much the three of us, as a package, it works for very complicated reasons that a lot of people don't fully understand," May responded.

Clarkson has long been a polarizing figure in the U.K., with critics accusing him of racism on a number of occasions, and supporters — including Prime Minister David Cameron — backing him. (Video via Channel 4)

Cameron told the BBC, "I hope this can be sorted out because it's a great program and he's a great talent."

But even if his appearance on "Have I Got News For You" doesn't herald a return to the BBC, it seems he won't be off the airwaves for long. (Video via Penguin Books)

This video includes an image from Tony Harrison / CC BY 2.0.