Jennifer Lawrence's Squad May Be Better Than Taylor Swift's 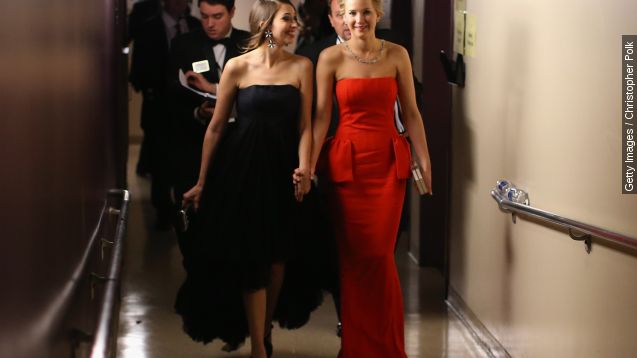 Jennifer Lawrence is the bestie we all dream of having. She's blunt, only swears when necessary and is basically our spirit animal.

Plus, she knows how to pull her weight in a human pyramid. Who doesn't want to be a part of that inner circle?

Simpson and Lawrence met eight years ago at a party, and "hit it off over a mutual respect for Chandler Bing." And we can see why those two bonded, after Simpson went as JLaw's date to the 2014 Oscars, she recapped it on MySpace and gave out her own awards to the stars.

For the record, Best Smelling went to Brad Pitt and Most Hollywood, naturally, to Harvey Weinstein, who apparently shook her hand and said, "You know who I am."

Hutcherson and Hemsworth have been Lawrence's "Hunger Games" co-stars for the past four years, and the three have grown to be best friends in real life — which is fine because we want Joshifer to happen. (Video via MTV)

And where would this world be without Amy Schumer and Jennifer Lawrence's new friendship? Schumer "hypothetically" invited JLaw on a boat trip, to which JLaw — always down to have fun — said, yes.

Since then, they've written a movie script together, danced together on top of Billy Joel's piano and congratulated each other when they won awards.

But there's an actual group of teens from JLaw's hometown of Louisville, Kentucky, who have dubbed themselves the star's real girl gang — seven girls who call themselves "Lawrence's Ladies."

Zoe Kuhn, the eight-grader leading the efforts, told WDRB she's a fan of the star because "she's okay to just be herself and show she has flaws, but that's okay."

Louisville has a campaign called "Hometown Heroes" where the city showcases some of the "greats" to come out of the town like Muhammad Ali and Col. Sanders. These girls thought JLaw should be included, so they set out to raise $10,000 to pay for the banner. (Video via WDRB)

They obviously achieved that goal, and even though the girls told Vanity Fair they received a quote from the star about her excitement for the banner, they have yet to meet her. But don't worry girls, we're positive a JLaw-style pizza party is coming your way.