Jennifer Lawrence Breaks Her Silence On The Sony Hack 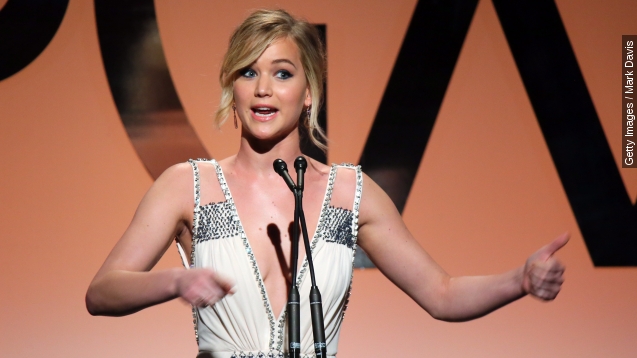 It seems Jennifer Lawrence is living a scene straight out of "American Hustle." She's talking business, and her candor may make you fall out of your chair.

The 25-year-old actress recently broke her silence about the Sony hack that happened last year, which revealed that she and Amy Adams earned less than their "American Hustle" male co-stars. The leaked info put her at the forefront of the discussion about the wage gap in Hollywood.

Lawrence wrote in an essay for Lenny: "When the Sony hack happened and I found out how much less I was being paid than the lucky people with d****, I didn't get mad at Sony. I got mad at myself. ... I didn't want to seem 'difficult' or 'spoiled.' ... I’m over trying to find the 'adorable' way to state my opinion and still be likable!'"

The star of "The Hunger Games" franchise was said to have "won" the Sony hack when it became known she earned nearly double her male co-star, Chris Pratt, for the upcoming movie "Passengers." But it's a battle Lawrence's friends think is far from over.

"People keep asking me, they say, 'Amy, is it an exciting time for women in Hollywood? Is it?' And I'm like, 'No!'" said Amy Schumer in her "Saturday Night Live" monologue.

Lawrence is joining a list of celebrity powerhouses, like Meryl Streep and Helen Mirren, who are speaking out about sexism in Hollywood and how it significantly decreases the longevity of women's careers.

Lawrence's essay comes on the heels of reports that the Equal Employment Opportunity Commission contacted female directors to investigate gender discrimination in Hollywood. The American Civil Liberties Union made a request in May to address the discrepancy between males and females sitting in the director's chair.