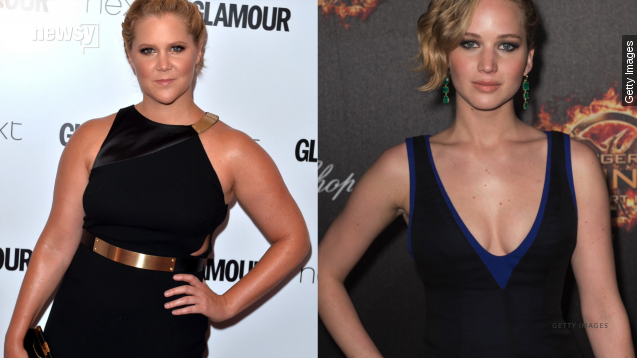 We all know Jennifer Lawrence as an actress, but now she's going to try her hand at writing her very first movie alongside her new friend, Amy Schumer.

She told the New York Times she's loved penning the script with her comedian pal. "Amy and I were creatively made for each other. We have different flavors. It’s been the most fun experience of my life."

Lawrence also said the script is nearly finished, with about 100 pages written. All we know about the film so far is that the pair are planning to star in it as well, playing sisters.

Who knows, maybe they'll end up as the next great comedy duo like Tina Fey and Amy Poehler, who play sisters in their next film titled — you guessed it — "Sisters." (Video via Universal Pictures / "Sisters")

Lawrence said she's only known Schumer for a few months, but they must've hit it off. Schumer tweeted this photo where she's jet skiing with the Oscar winning actress.

With Schumer attached, it's safe to assume the film will be a comedy. If true, it would be the first time Lawrence has starred in a film that isn't mostly serious.

Not only that, this will also be the first time she's been involved with a film off-screen. Let's hope she's as funny on paper as she is in person.

"There was this big fancy party, this Guy Oseary Madonna party. If you get invited you know you're like super important. And I puked on his porch," Lawrence told Seth Meyers.

And it will certainly help to work with a veteran comedy writer like Amy Schumer. She's written three seasons of her outrageous Comedy Central Show, "Inside Amy Schumer," as well as her hit comedy film, "Trainwreck." (Video via Universal Pictures / "Trainwreck")

Even though the script isn't even finished yet, we're guessing movie studios will be lining up for the rights to the new film, as both women have proven to be bankable stars.

"Trainwreck" pulled in over $100 million in the U.S. in less than six weeks. And, of course, Lawrence stars in the massive "Hunger Games" franchise which has grossed more than a billion dollars in just three films. (Video via Lionsgate / "The Hunger Games: Mockingjay - Part 2")