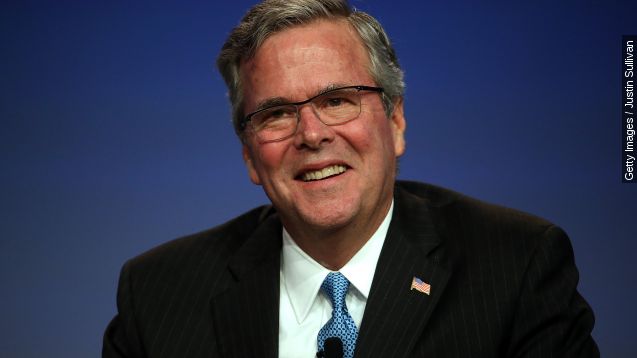 "I'm running for president in 2016, and the focus is gonna be about how we — if I run," Jeb Bush told reporters in Nevada.

Let's be real. It's not a matter of if at this point but when. And if it's no secret, why not just come out and say it?

"The FEC is watching," Rick Santorum said at the Iowa Ag Summit.

Watching and giving Jeb Bush every reason to take his time. You see, the Federal Election Commission has different fundraising requirements for those considering a run and those who are formally running. (Video via Right To Rise PAC)

The most declared candidates can accept from individual donors during primary season is $2,700, and those donations are subject to disclosure requirements.

Of course, those requirements mean little when undeclared candidates like Bush are out there raising unlimited amounts of cash for super PACs that will support their eventual campaigns, all while headlining dozens of fundraisers, meeting with voters in early primary states — doing everything an official candidate would do. (Video via Right To Rise PAC)

So, there's no rush for Bush to say these four words:

And/or file the necessary paperwork.

Because once he does, he can no longer communicate — much less coordinate — with his super PAC, Right To Rise.

A super PAC that's supposed to operate independently of his campaign; that's the only reason its allowed to take in so much money. But in practice, Right to Rise has become the unofficial extension of his yet-to-be-official campaign.

It's expected to take on a pretty unprecedented role: actually handling the TV ads for the future Bush campaign, according to Politico.

And National Journal reports Bush's longtime political adviser will likely head up the super PAC and manage the $100 million it's expected to rake in by the end of May.

Although Bush has the most aggressive pre-campaign operation out there, he's not alone.

"Should we choose ... my lawyers love when I say that ... we're exploring a campaign ... should we choose to run for the highest office in the land," Wisconsin Gov. Scott Walker said at the Conservative Political Action Conference.

Scott Walker, along with Bush, Rick Santorum, and Martin O'Malley are all named in complaints filed with the FEC by watchdog groups who claim the four men were blatantly skirting campaign finance rules in order to raise unlimited amounts of cash.

The FEC that's tasked with investigating violations, but gridlock among the agency's commissioners has made it tough to enforce much.

Which is why campaign finance advocates are now calling on the Justice Department to get involved.

If you're wondering, there's a reason Sens. Ted Cruz, Rand Paul and Marco Rubio announced when they did. Federal officeholders are barred under federal law from raising money on behalf of super PACs. So there was little reason for them delay their announcements.

The rest of them can only keep us guessing for so long. The first GOP primary debate is scheduled for Aug. 6.