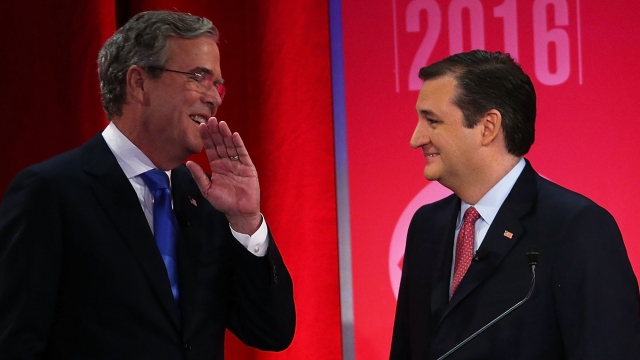 SMS
Jeb Bush's Endorsement Is Just What Ted Cruz Needed
By Ben Lawson
By Ben Lawson
March 23, 2016
Now with support from Jeb Bush, Ted Cruz might have better luck pulling in the establishment Republican support to get an edge over Donald Trump.
SHOW TRANSCRIPT

In a statement released by the Cruz campaign, Bush said: "For the sake of our party and country, we must move to overcome the divisiveness and vulgarity Donald Trump has brought into the political arena, or we will certainly lose our chance to defeat the Democratic nominee and reverse President Obama's failed policies."

This news comes a day after Cruz managed to secure the Utah primary and the state's 40 delegates but lost Arizona's 58 delegates to Donald Trump.

Cruz's campaign has managed to lock in a couple endorsements from notable Republicans in the last few weeks, though you could argue some of those nods of support are more anti-Trump than pro-Cruz.

Carly Fiorina, another defeated presidential hopeful, rallied to his side earlier this month.

"So when the establishment says Ted Cruz is too much of a conservative, too much of a fighter, he won't get along, I say, 'You go, Ted!'" Fiorina said.

And even former presidential candidate Sen. Lindsey Graham has thrown his support behind Cruz despite making some harsh jokes about the Texas senator just last month.

"If you killed Ted Cruz on the floor of the Senate, and the trial was in the Senate, nobody would convict you," Graham said.

And now with Bush's support, Cruz might have better luck pulling in the establishment Republican support to get an edge over Trump.

Trump is over halfway to the 1,237 delegates he needs to secure the nomination.

This video includes images from Getty Images and clips from Cruz for President, KSTU and Lindsey Graham 2016.