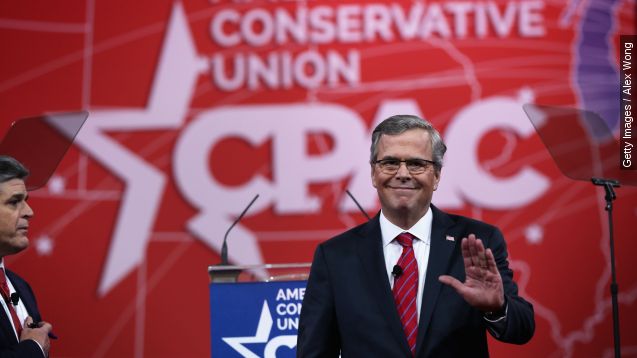 By Matt Moreno
June 14, 2015
Jeb Bush announced his presidential candidacy Monday and entered a crowded field, though he has a clear lead in fundraising and family connections.
SHOW TRANSCRIPT

Bush told supporters, "I'm a candidate for president of the United States."

The former Florida governor is entering a historically crowded field of candidates, which he leads only slightly. (Video via Jeb Bush)

To win, Bush will not only need to break away from the GOP field but also from the legacy of his father and brother.

He told CNN's Dana Bash, "I don't have to disassociate myself from my family, I love them, but I know that for me to be successful, I'm going to have to show my heart, tell my story."

Bush enters the field as the "heavyweight" candidate — a popular former governor of a large, key swing-state and the scion of a powerful political family.

And although that's given him a leg up in fundraising and name recognition, it hasn't scared away other candidates — meaning that Republicans might be wary about a third Bush.

The Washington Post writes, "Bush has been dogged by deep skepticism within the GOP base about his trustworthiness and viability, and he has struggled to differentiate himself from his brother and father, both former presidents."

Bush appointed a new campaign manager, Danny Diaz, about a week ago — a sign that changes may be on the way for the young campaign.

Because while Bush is a solid retail politician with executive experience, he'll be competing against the likes of fellow Floridian Marco Rubio, who threatens to challenge Bush in his home state. (Video via WJLA)

And then there's another governor, Scott Walker of Wisconsin, who's earned national recognition for his high-profile and successful efforts to weaken organized labor. (Video via NRA)

So what's next? Bush will be traveling to Iowa, where he currently trails Scott Walker by 9 points with only 231 days to go before they start tallying the votes.