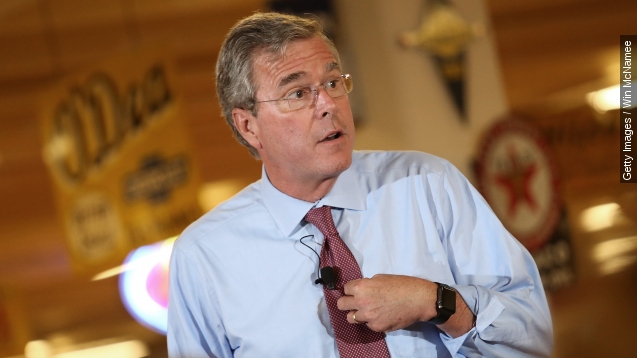 SMS
Jeb Bush Bungles Defense On 'Anchor Babies'
By Jake Godin
By Jake Godin
August 25, 2015
While trying to defend his use of the term "anchor babies," presidential hopeful Jeb Bush dug himself a little deeper by applying the term to Asians.
SHOW TRANSCRIPT

"What I was talking about was the specific case of fraud being committed where there is organized efforts — and frankly it's more related to Asian people — coming into our country, having children in that organized effort, taking advantage of a noble concept, which is birthright citizenship," Jeb Bush said during a press conference in McAllen, Texas.

That was Bush defending his use of the phrase "anchor babies," a term that's become a bit controversial between presidential hopefuls and Hispanic immigrants.

Of course, just switching the blame to a different group of immigrants probably won't fix the problem in critics' eyes.

What Bush may have been referring to is so-called "birth tourism" — when a pregnant citizen from another country comes to the U.S. for the sole purpose of giving birth on U.S. soil, which makes the child a U.S. citizen.

It involves cheating the U.S. visa process. (Video via CBS)

The process is also a million-dollar business for the companies that orchestrate it — all of which reportedly don't get taxed.

Thousands of Chinese citizens have reportedly traveled this route in order to have children with U.S. citizenship, though it's also common with Korean, Turkish and Taiwanese women.

Federal authorities have cracked down on birth tourism. Instead of targeting the women, they go after the businesses running the operations.

Unlike parents of so-called anchor babies, birth tourists typically return to their home countries and use the U.S. citizenship to send their children to college without student visas. (Video via CNN)

Some analysts point out that, even if Bush was talking about birth tourism during his press conference, that's a very different policy debate from the one currently being had over illegal immigration.