Jay Z's Music Streaming Sounds Great, But It Will Cost You 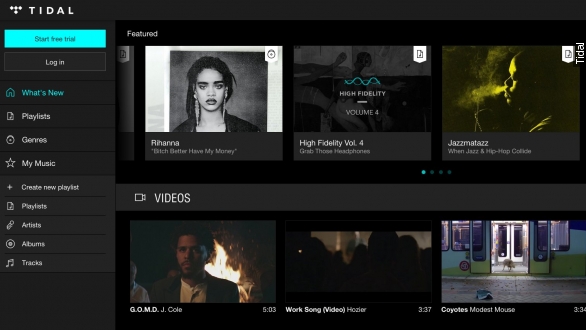 SMS
Jay Z's Music Streaming Sounds Great, But It Will Cost You
By Matt Moreno
By Matt Moreno
March 30, 2015
Tidal prides itself on providing a high-quality sound and video experience, but the next-level service costs nearly twice as much as its competitors.
SHOW TRANSCRIPT

Jay Z is launching a new music streaming service, and boy, does he have the star-power backing to do so.

Here's the site's home page, where you can search by featured content, videos, albums, playlists, tracks and more. Jay Z will have no issue getting the word out about the new service, either.

On Twitter, the biggest names in the music world tweeted about the service and changed their profile pictures to a tidal wave shade of blue, including Lil Wayne, Beyonce, Kanye West, Madonna and more.

Still, that doesn't mean the music service will be totally successful. It already has its fair share of competitors, including Spotify, iTunes, Beats Music — all with significantly lower price tags than Tidal's $19.99 a month cost for lossless sound quality.

"HiFi is kind of what Tidal is theming off of. Tidal, they want to be the luxury of streaming services, hence the price point being double that of Spotify and most other streaming services out there," Revolt TV reviewer Desean Barnes said.

Company representatives tell Page Six it will not only be user-friendly but artist-friendly, too — something Taylor Swift complained about months ago when she pulled her music from Spotify, explaining to Time she didn't feel the service compensates artists fairly.

Assuming it is a success, it could make Jay Z and friends a lot of money. As the founder of entertainment company Roc Nation and sports agency Roc Nation Sports, Jay Z is worth some $520 million, according to Forbes.

And a writer for that outlet says this latest venture could put him over the edge. "For Jay Z, considering the current climate, owning a music-driven tech company presents the perfect path for quickly breaking into the real billionaire boys club."

Jay Z will launch the service at a press event Monday evening in New York.