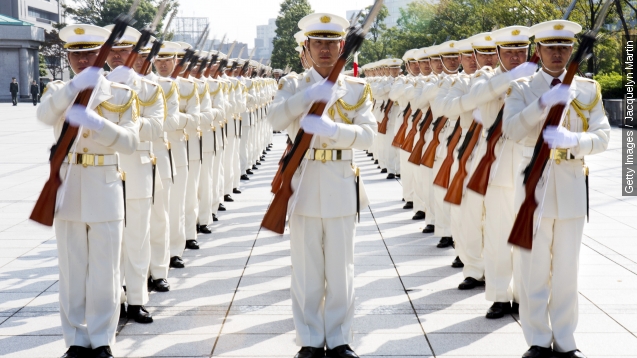 Japan's constitutional pacifism is now a thing of the past. On Friday, the country's parliament voted to allow its military to fight in battles overseas. After World War II, the country was only allowed to enter international conflicts if Japan itself was threatened. (Video via The History Channel)

The move is a big win for Japan's prime minister, Shinzo Abe, who has wanted the change so his country could face new possible military threats, especially from neighboring China.

According to the BBC, three conditions must be met for Japan to enter international conflict: Japan or an ally must be under attack from a clear threat to people; there can't be any other way to fend off the attack; and only minimal force may be used.

The showdown in parliament went on for 200 hours and turned into an actual fight Thursday. Opponents worry the new laws will put Japan at greater risk of being involved in wars that don't necessarily have anything to do with the country. (Video via BBC)

Protests have taken place outside of parliament for days and, according to a recent poll, 54 percent of respondents are against the new bills. That didn't seem to matter much, though. The Japan Times reported the opposition was always powerless to stop the bills from going through. (Video via Al Jazeera)

This is clearly a huge step forward for the U.S.-Japan partnership. The Japan-U.S. Security Treaty of 1951 only guaranteed America would defend Japan militarily, not the other way around. And with constant threats from North Korea, this will allow Japan to shoot down a nuclear missile headed to the U.S. — if such an attack were to take place. (Video via CNN)

This video includes images from Getty Images, Embassy of Japan in the United States of America and music from Chris Zabriskie / CC BY 4.0.