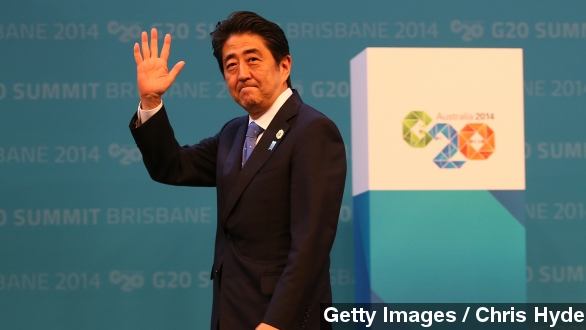 Following a surprise second-quarter decline, Japan's economy is officially in recession. Now, economists are trying to figure out what the unexpected slip means for the country and the world.

Japan's GDP shrank by 1.6 percent in the third quarter, following a revised 7.1 percent drop in the previous period. The news came as a shock to most analysts, who expected the economy to rebound with 2.25 percent growth.

The current economic slump is largely being blamed on a recent sales tax hike, which throttled consumer spending. Now that Japan's in a full recession, Abe will likely put off an additional tax increase and call early elections in an effort to bolster the public mandate for his reforms. (Video via NHK, Al Jazeera)

The recession also adds to the slew of bad news about the global economy in recent months — both Europe and China have recently posted disappointing growth figures.

It's enough to make some people, including Britain's prime minister David Cameron, see a serious global economic downturn in the future. In an op-ed posted in The Guardian, Cameron warned about "red warning lights" flashing on the dashboard of the global economy.

Not the sort of message you want to hear from a world leader coming back from an important summit of the 20 major economic powers — a summit where world leaders pledged to grow the global economy by 2 percent over five years.

But while Japan's technically in a recession, not every analyst has a bleak forecast for the country. A financial analyst with the Nomura Group told the Financial Times the drop in consumer spending might have hit bottom, especially if Abe holds off on any new taxes.

"Consumer spending recovered in August and September, albeit gradually, off a bottom in July. ... The delay in the consumption tax hike should combine with recent yen weakness to boost the recovery trend for the economy."