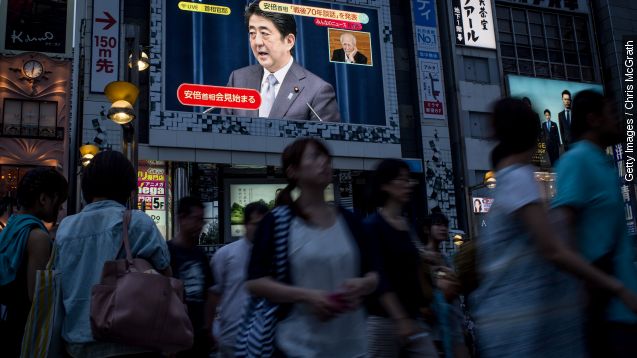 On the 70th anniversary of the end of World War II, Japan offered an apology — of sorts.

Carefully worded because Japan's Chinese and Korean neighbors will be scrutinizing his words very closely in the coming days. Those were the two nations hit hardest by Japan's imperial conquests during WWII.

In his statement, Abe maintained Japan's previous official apologies, made by the sitting prime minister in 1995 and once again in 2005. But he did not go so far as to actually say that apology, as had been done before. (Video via Foreign Correspondents' Club of Japan)

Instead, he expressed his "profound grief" for those who died in WWII and said, "We must not let our children, grandchildren, and even further generations to come, who have nothing to do with that war, be predestined to apologize."

That's probably not quite the apology Japan's neighbors were hoping for.

Especially for the so-called "comfort women", or the Korean women forced to work in brothels by Japan's Imperial Army during the war.

Those women have long demanded an official apology from Japan. Some have even made moves to file a $20 million lawsuit against the nation to get it.

The closest Abe got to issuing that apology during his speech was near the end, when he said the injured "dignity and honor" of women from the war will not be forgotten and Japan will always stand at their side.