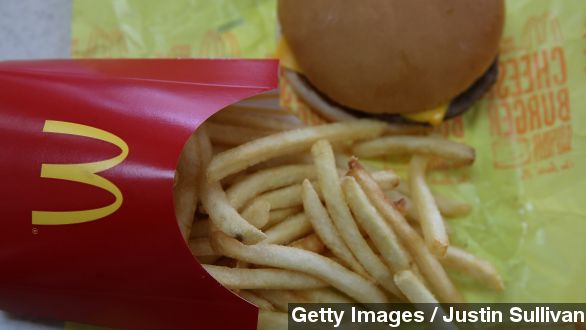 By Jake Godin
December 17, 2014
Japanese McDonald's are suffering from a shortage of french fries and have started rationing them thanks to port troubles in the U.S.
SHOW TRANSCRIPT

We don't want anyone to panic here, but Japan is ... running out of french fries. (Video via McDonald's)

Sure, the Russian economy may be tanking — but starting Wednesday, McDonald's in Japan will no longer serve large and medium orders of fries.

And, believe it or not, the shortage isn't from the short-lived "potato party" phenomenon that took hold of South Korea and Japan a few years back or when people use french fry sales as an excuse to buy hundreds of orders of fries.

No, instead Japan's 2014 French Fry Shortage is due to a labor dispute between ports and their dockworkers in its main spud supplier — the U.S. Specifically, major west coast port cities like Portland and San Francisco.

The impact? A 45 percent decline in the average monthly volume of french fry imports. The silver lining is that meals that would normally have medium fries are now 43 cents cheaper. (Video via McDonald's)

But these are tough times for the Japanese McD's. After being rocked by a food safety scandal earlier this summer, the Japanese food chain forecasted it'd take a net loss of $157 million for 2014.

But it's doing everything in its power to get the Japanese people their potatoes. According to one Japanese outlet, the company has airlifted more than 1,000 tons of french fries from the U.S. and started taking imports from cities on the east coast. (Video via FedEx)

Japanese french fry lovers won't be the only ones to suffer if things don't improve — the National Retail Federation and National Association of Manufacturers estimate that if labor negotiations on the west coast fail, it could cost the U.S. economy up to $2 billion per day.

This video includes an image from Getty Images and music from Broke For Free /CC BY 3.0.