Japan's Emperor Hints At Wanting To Abdicate ... But He Can't Say It 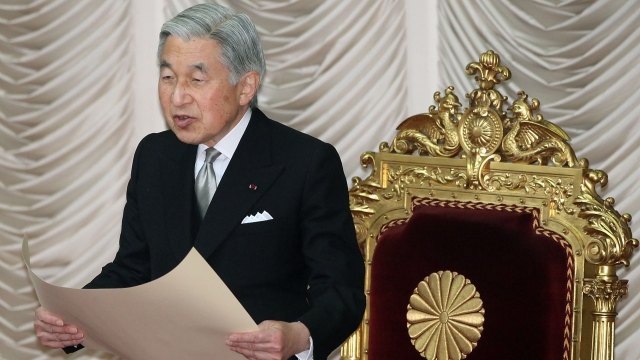 SMS
Japan's Emperor Hints At Wanting To Abdicate ... But He Can't Say It
By Ryan Biek
By Ryan Biek
August 8, 2016
Emperor Akihito made the remarks during his second-ever televised speech to the Japanese public.
SHOW TRANSCRIPT

In only his second-ever televised speech to the public, Japan's emperor strongly hinted at a desire to leave the throne.

Akihito became emperor in 1989. The 82-year-old said Monday, "When I consider that my fitness level is gradually declining, I am worried that it may become difficult for me to carry out my duties as the symbol of the state with my whole being."

While the emperor says he's healthy now, he's had prostate cancer and heart issues in the past.

But it could take years for Akihito to actually abdicate the throne. There's currently no legal process for an emperor to step down in Japan, and a law would have to be amended for him to do so.

The emperor can't ask for the law to be amended, though, because the constitution imposed by the U.S. at the end of World War II forbids emperors from political speech.

A recent survey found more than 85 percent of Japanese citizens believe changes should be made to allow an emperor to legally abdicate the throne.

If Akihito did step down, it would be the first time an emperor did so since 1817. Fifty-six-year-old Crown Prince Naruhito is next in line for the throne.

This video includes clips from Arirang, BBC, The Imperial Household Agency, CCTV and Kyodo News, and images from Getty Images.