Japan's Election Isn't All About Abenomics 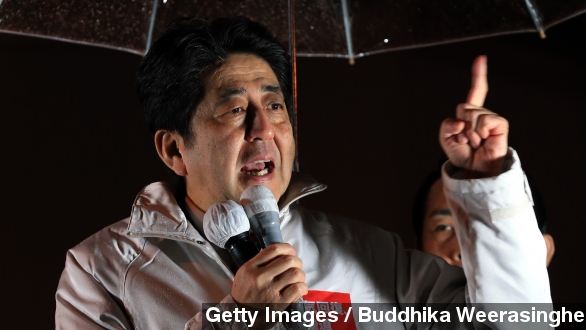 Shinzo Abe's party won big during Japan's parliamentary elections on Sunday, picking up more than enough seats needed to get a two-thirds majority.

Abe's conservative party, called the Liberal Democratic Party, were favorites in the snap election, which saw only 52 percent voter turnout — the lowest since the second world war. (Video via Press TV)

Abe's election has reportedly confused many Japanese voters, because it comes two years earlier than needed, but it also comes at a time when the opposition is fragmented. (Video via Al Jazeera)

Abe's policy has consisted of stimulus spending, to weaken the Yen and boost trade, but it's so far struggled to raise wages, another key part of Abenomics. (Video via Arirang)

Tobias Harris told CNN, "Real incomes have continued to decline, they've declined for sixteen straight months ... his task in the new year really is to get wages up and if they don't get wages up it's going to be really hard to see inflation rise."

Still the opportunistic motivation for Abe to call the election isn't necessarily relegated to economic policy.

By talking up the election as a referendum on his economic policy, Abe has drawn focus away from more unpopular policies he supports, like restarting the country's nuclear program. (Video via BBC)

Abe could also use his four more years in power to continue pushing for reform in the country's self-defense force.

Abe wants to amend the constitution to make it easier to deploy the Japanese military overseas, despite popular resistance to the idea. (Video via Youtube / HillsboroughCounty)

Abe now doesn't have to hold another election until 2018.