Japan Has So Many Centenarians, It Can't Give Them All Gifts 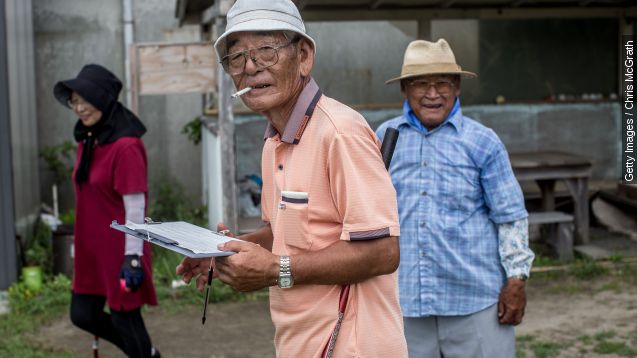 SMS
Japan Has So Many Centenarians, It Can't Give Them All Gifts
By Jake Godin
By Jake Godin
August 21, 2015
Japan can no longer afford to give every 100-year-old a silver sake dish, but bigger issues loom due to the country's aging population.
SHOW TRANSCRIPT

Japan has an aging problem.

There are a lot of old people in Japan. So many the government can no longer afford to hand out commemorative silver sake dishes to those who hit the age of 100. (Video via Hidali, YouTube / 横川由紀子)

That's according to Kyodo News, which reports the Japanese government is looking for a cheaper option such as a less-expensive sake dish or simply a letter of congratulations. (Video via Al Jazeera)

And the number of Japanese centenarians is continuing to rise.

Kyodo says the number of 100-year-olds will reach 39,000 in 2018. The number back when they started handing out the silver dishes a half-century ago? One hundred fifty-three. (Video via BBC)

At 84 years, Japan has the highest life expectancy in the world, according to the World Health Organization.

Japan also has a low-birthrate problem. So the national population is both declining and getting older.

And as far as conventional wisdom goes, an aging population isn't exactly good for the economy.

So, what's Japan doing about it?

Simply put, the government's trying to get more young people to marry. That could help fix the birthrate issue and stabilize Japan's declining population. (Video via Happy Dayz Productions)

As for the aging population, that's a bit trickier. You can't really tell a group of people to, well, stop living.

But you can tell them to work longer. One fix the government is trying out is raising the minimum retirement age from 61 to 65 incrementally by 2025.

For now, there are some grim forecasts for Japan's economy if the country doesn't find a way to solve its aging crisis.

This video includes images from Getty Images, Japanexperterna / CC BY SA 3.0, Yutaka Tsutano / CC BY 3.0 and Hajime Nagahata / CC BY 3.0.