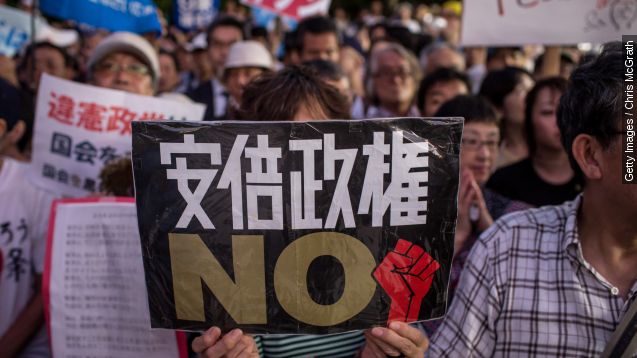 SMS
Japan Divided As Abe 'Bulldozes' Military Bills Through
By Kate Grumke
By Kate Grumke
July 16, 2015
Pacifist protesters across Japan are against Abe's push for more military powers in the face of international and regional security threats.
SHOW TRANSCRIPT

The bills would allow the country limited military participation in some foreign conflicts. The change has sparked large protests and a petition of 1.65 million signatures. The protesters say the change violates the pacifist constitution Japan adopted after World War II.

But Japanese lawmakers have actually been chipping away at that pacifist policy for years.

Japan provided military support for U.S. actions in Afghanistan in 2001, in the form of naval tankers for refueling. And in 2006, Japan's self-defense forces were deployed for reconstruction in Iraq.

But Japan's Prime Minister Shinzo Abe wants more and has been pushing for it for months. While addressing a joint meeting of Congress in the U.S., he talked about securing international waters and touted the military changes.

"Once in place, Japan will be much more able to provide a seamless response for all levels of crisis. These enhanced legislative foundations should make the cooperation between the U.S. military and Japan’s Self Defense Forces even stronger," said Japanese Prime Minister Shinzo Abe.

One other factor here: There's definitely a power shift happening in east Asia.

China's growing military strength and aggression in the South China Sea might have pushed Japan's leaders toward this change. (Video via The Kremlin)

And China's government isn't happy about it. According to Xinhua, China's State Councilor "urged the Japanese side to earnestly draw lessons from history ... and not to do any thing unconducive to regional peace and stability."

Abe also pointed to the kidnapping and murder of two Japanese citizens at the hands of ISIS as an argument in favor of expanding military powers.

The bill has already been sent to the upper house, in a process that was so quick, one Japanese outlet said the bills were "bulldozed" through.