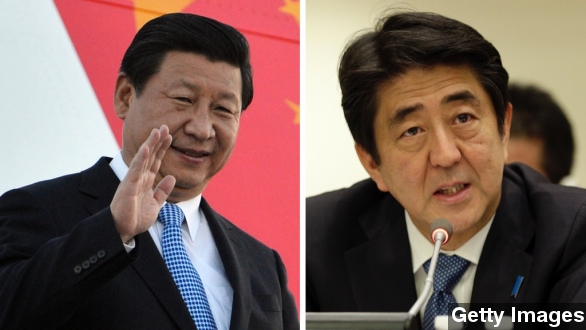 A key diplomatic breakthrough could help thaw the icy relationship between Japan and China. The two nations have agreed to improve relations ahead of the Asia-Pacific Economic Cooperation summit in Beijing this weekend.

The text of the four-point agreement, released Friday after months of negotiations, is pretty straightforward: Japan and China will respect the terms of previous agreements, work to build deeper bilateral ties, and avoid conflict escalation.

The key part concerns this small but strategically important chain of islands in the East China Sea, known as the Senkaku Islands in Japan and the Diaoyu Islands in China.

The island chain, currently under Japan's domain, has been at the center of a lengthy ownership squabble between multiple Asian nations; a dispute which has led to several maritime confrontations and strained relationships.

Now, Friday's agreement doesn't resolve the dispute — it simply says China and Japan will acknowledge their different views on the matter, and avoid escalating tensions any further.

But that acknowledgement is a key concession from Japan. As The Diplomat noted last month, Japan's Prime Minister Shinzo Abe has staunchly refused to recognize China's claims on the islands in the past.

And while nothing is confirmed yet, the agreement does open up the possibility of a meeting between Abe and Chinese President Xi Jinping on the APEC sidelines. It'd be the first meeting between the two since Abe assumed power in 2012.

But an agreement over the disputed islands probably won't be enough to bury the hatchet. China's also protested Abe's decision to visit a shrine commemorating Japan's World War II dead.

And the debate has been further inflamed by nationalistic sentiment in both countries; protests over the issue in China and Japan have increased the enmity between citizens of the two nations. (Video via RT)

The APEC summit began Friday in Beijing, and will host foreign leaders from the group's 21 member economies, including President Barack Obama and Russian President Vladimir Putin.