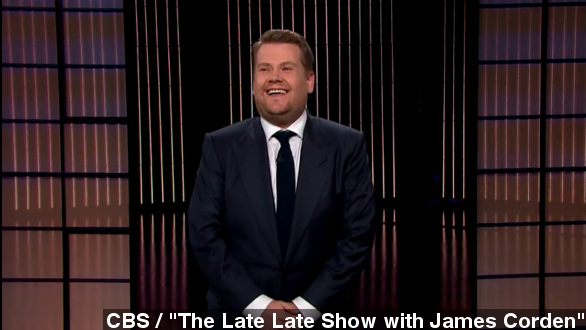 Ferguson often opened his show by questioning audience members and playing with puppets. Corden's opened with a standing ovation and a house band playing at full tilt. (Video via CBS / "The Late Late Show")

Where Ferguson had two men in a horse costume waiting in the wings, Corden has a Bud Light-sponsored bar.

The only similarity seems to be where Ferguson could toss to a talking animatronic skeleton, Corden can toss to Reggie Watts, who is similarly weird. (Video via TED)

That's to be expected — Ferguson was a late-night host who rejected the conventions of late-night hosting. But where Corden has next to no similarities to Ferguson, he has loads with other late-night hosts — and one in particular.

Like Jimmy Fallon, for Corden's first run out as host, he was self-deprecating and amiable. They both talked about their wives and children, and both did this. (Video via NBC / "The Tonight Show Starring Jimmy Fallon")

"I'm also lucky enough to have both of my parents with me tonight," Corden said.

Corden's bit with guest Tom Hanks, running the gamut of Hanks' filmography in five minutes, was reminiscent of the skits Fallon regularly runs with his guests. (Video via NBC / "The Tonight Show Starring Jimmy Fallon")

There are, of course, differences: Corden is a Tony winner with a background in scripted television, and he's already strayed away from some late-show fixtures.

Instead of a desk, Corden's opted for a more Graham Norton-style setup with both guests sitting on a couch and Corden in a swivel chair next to them. (Video via BBC)

Corden's also a little bawdier than Fallon, at one point bringing up guest Mila Kunis' sex life — albeit in the context of her newborn baby.

And while, like Fallon, Corden high-fived some audience members after the show, first he bowed.