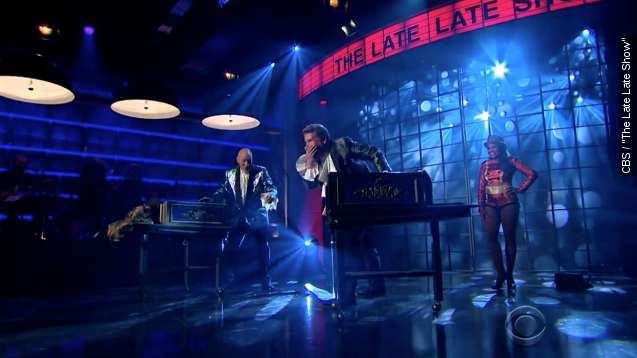 On Tuesday we learned James Corden shouldn't give up his day job hosting "The Late Late Show" to pursue a magic career full time.

It all happened when guest Patrick Stewart and Corden put on a magic show for all the viewers.

The performance started out perfectly fine, with the duo pulling some scarves out of a magic hat.

But then came the infamous "sawing a woman in half" trick and that's where Stewart truly outshined his partner.

Yeah, when Corden dropped that mirror it revealed the woman's legs weren't actually in his box like he and Stewart wanted everyone to believe.

Thankfully, it seemed like no one really cared about the mess up.

People were raving about Stewart and Corden on Twitter, especially loving their outfits.

Well, we guess if there's anyone who could pull off late night talk show magic while wearing ruffled polyester shirts with sparkly jackets, it's these two.