Jackie Chan Finally Got His Oscar 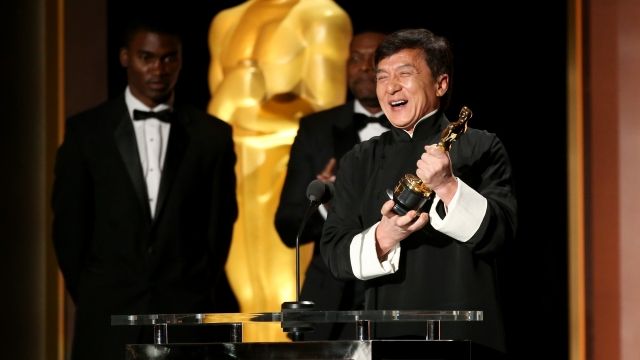 SMS
Jackie Chan Finally Got His Oscar
By Ryan Biek
By Ryan Biek
November 13, 2016
The 62-year-old actor received an honorary Oscar at the Governors Awards on Saturday night.
SHOW TRANSCRIPT

The 62-year-old actor received an honorary Oscar at the Governors Awards on Saturday night.

"My dad always said, 'Son, you get so many movie awards in the world, when [will] you get one of these?'" Chan said looking at his honorary Oscar. "Then I just look at my dad ..., 'Dad, I only make comedy-action movies.'"

Chan might not be the prototypical Oscar winner, but with over 200 films spanning a more than 50-year career, he's certainly left his mark on two important genres.

More than awards, though, Chan said his fans are the reason he keeps "kicking and punching [and] breaking [his] bones" to make movies.