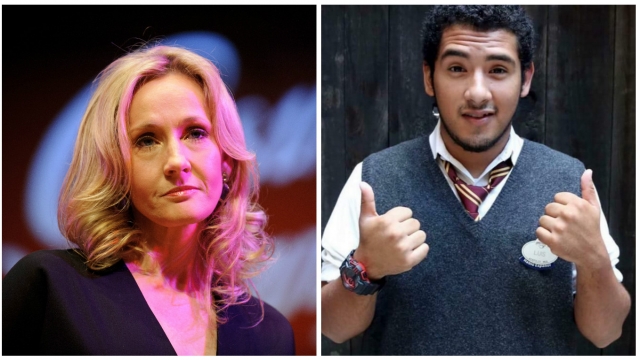 SMS
J.K. Rowling Tweets Her Condolences For Nightclub Shooting Victim
By Cody LaGrow
By Cody LaGrow
June 13, 2016
The author said she couldn't stop crying after hearing about a "Harry Potter" ride operator who died in the Orlando shootings.
SHOW TRANSCRIPT

The worst mass shooting in United States history is bringing an outpouring of support from across the world — including from author J.K. Rowling.

The woman behind "Harry Potter" tweeted a tribute to Luis Vielma, a 22-year-old man who lost his life in the massacre.

The author tweeted this photo of Vielma in his Hogwarts uniform, appropriately wearing Gryffindor colors — symbolic of those who are courageous, daring and brave.

Universal Orlando told Newsweek: "We are deeply saddened over the loss of our team member. ... Our thoughts and prayers are with Luis, his family, and all the victims of this tragedy."

Vielma was among the 50 people killed and 53 people injured at Pulse nightclub in Orlando early Sunday morning.