J.K. Rowling Says Donald Trump Has Every Right To Be A Bigot 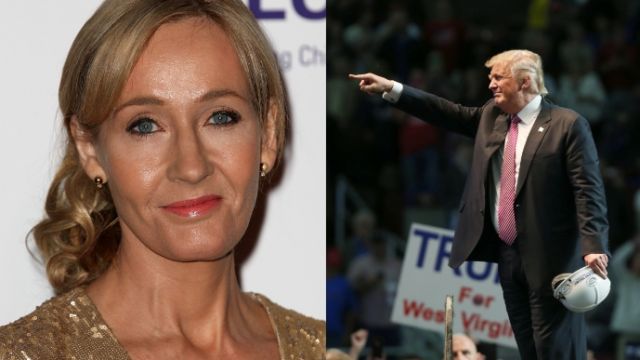 SMS
J.K. Rowling Says Donald Trump Has Every Right To Be A Bigot
By Calvin Stovall
By Calvin Stovall
May 17, 2016
The "Harry Potter" author says Trump's freedom of speech "protects my freedom to call him a bigot."
SHOW TRANSCRIPT

J.K. Rowling doesn't like most of what Donald Trump says. But Monday, the British author told a crowd in New York that she does not agree with an online petition aimed at banning the presidential candidate from her home country.

"He has my full support to come to my country and be offensive and bigoted there," Rowling said.

The "Harry Potter" author added that the same freedom of speech that allows Trump to say what he wants also protects her "freedom to call him a bigot."

In December 2015, a petition was launched to ban Trump from the U.K. for hate speech. It gained over 500,000 signatures.

Parliament debated the issue in January.

"I've heard of a number of cases where people have been excluded for incitement, for hatred — I've never heard of one for stupidity. And I'm not sure that we should be starting now," member of Parliament Paul Scully said.

"If the United Kingdom were to ban Donald J. Trump from coming into Britain, that would be the biggest boost to his campaign in America that we could possible give," member of Parliament Kwasi Karteng said.

No vote was made during the hearing.

Rowling made the comments about Trump while being honored by PEN America for her work to "oppose repression in any form and to champion the best of humanity."

This video includes clips from U.K. Parliament, Donald J. Trump For President, CNN and The Guardian, and images from Getty Images.