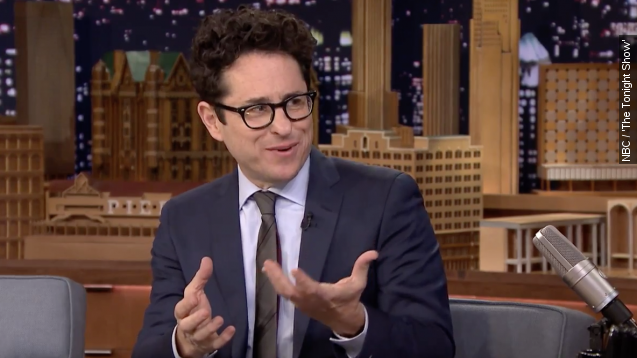 SMS
J.J. Abrams Literally Broke His Back Filming 'Star Wars'
By Ben Lawson
By Ben Lawson
December 1, 2015
Director J.J. Abrams wasn't willing to let something like a broken back stop him from working on "Star Wars: The Force Awakens."
SHOW TRANSCRIPT

Remember in June 2014 when Harrison Ford broke his leg on the set of "Star Wars: The Force Awakens"? Well, he wasn't the only person injured on the set that day.

Director J.J. Abrams told Jimmy Fallon that he broke his back when trying to lift the door that fell and broke Harrison's leg.

"It felt like I was doing one of those Incredible Hulk, trying to lift a car off a friend, someone you love. Except I was not the Hulk. ... I could not lift the door, and I broke my back," J.J. Abrams said on "The Tonight Show."

But despite his back injury and Harrison having to take a few months off, J.J. told Entertainment Weekly the accident might have had a silver lining. (Video via Walt Disney Studios)

He said it gave them time to reshoot scenes and change parts of the script the team wasn't happy with. Honestly, we're just glad both the director and leading actor were OK in the end and able to finish shooting.

"You literally broke your back for 'Star Wars.' That's what I'm talking about, that's dedication," Jimmy said.