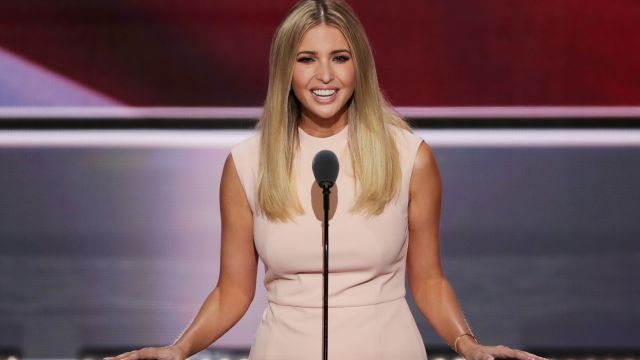 SMS
Ivanka Trump Says Any Workplace Harassment Is 'Inexcusable'
By Katherine Biek
By Katherine Biek
August 3, 2016
She made the comments after her father told USA Today Ivanka would "find another career" if she were sexually harassed at work.
SHOW TRANSCRIPT

Ivanka Trump says any type of harassment in the workplace is "inexcusable."

The daughter of Republican presidential nominee Donald Trump was speaking about her father's campaign on Fox News' "On the Record" Tuesday when the topic of sexual harassment was brought up.

When asked about what his daughter would do if she were harassed at work, Donald Trump told USA Today, "I would like to think [Ivanka] would find another career or find another company."

SEE MORE: Ivanka Trump Took Care Of Some (Fashion) Business At The RNC

"I think what he was saying was Ivanka is a strong, powerful woman who won't allow herself to be, you know, objected to it," Eric Trump said on CBS This Morning.

Ivanka has spoken about sexual harassment before, acknowledging she was on the receiving end of some of it in her book "The Trump Card: Playing to Win in Work and Life."

But she took a harder stand Tuesday on Fox News. In her book, she advises her readers, "Learn to figure out when a hoot or a holler is indeed a form of harassment and when it's merely a good-natured tease that you can give back in kind."

This video includes clips from Donald J. Trump for President Inc. and CBS This Morning, and  images from Getty Images. Music provided courtesy of APM Music.