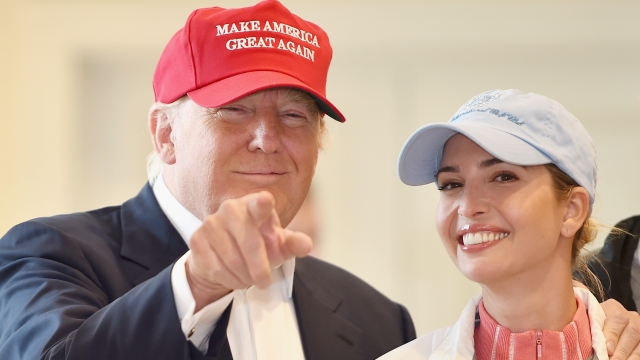 SMS
Ivanka Trump's Chinese-Made Scarves Recalled Over Burn Risk
By Ben Lawson
By Ben Lawson
April 7, 2016
A recall has been issued for some of Ivanka Trump's scarves, which are manufactured in China — the type of outsourcing her father says he's against.
SHOW TRANSCRIPT

A collection of scarves from Ivanka Trump's fashion line are being recalled because they are too flammable and pose a burn risk.

The Consumer Product Safety Commission said Wednesday the recall involves about 20,000 scarves that were manufactured in China.

It's an example of the type of outsourcing her presidential-candidate father, Donald Trump, condemned earlier this year.

"We're going to get Apple to start building their damn computers and things in this country, instead of in other countries," Donald Trump said at a rally in January.

Donald Trump has called on Apple and other companies to start making their products in the U.S.

But many of the products under his own Trump brand are made overseas.

He's acknowledged this and said it's because China has "manipulated their currency to such an extent that it's hard for our companies to compete."

That's something Trump said he wouldn't let happen if he were to become president.

This video includes clips from Apple and Donald J. Trump for President, Inc., and images from Getty Images.